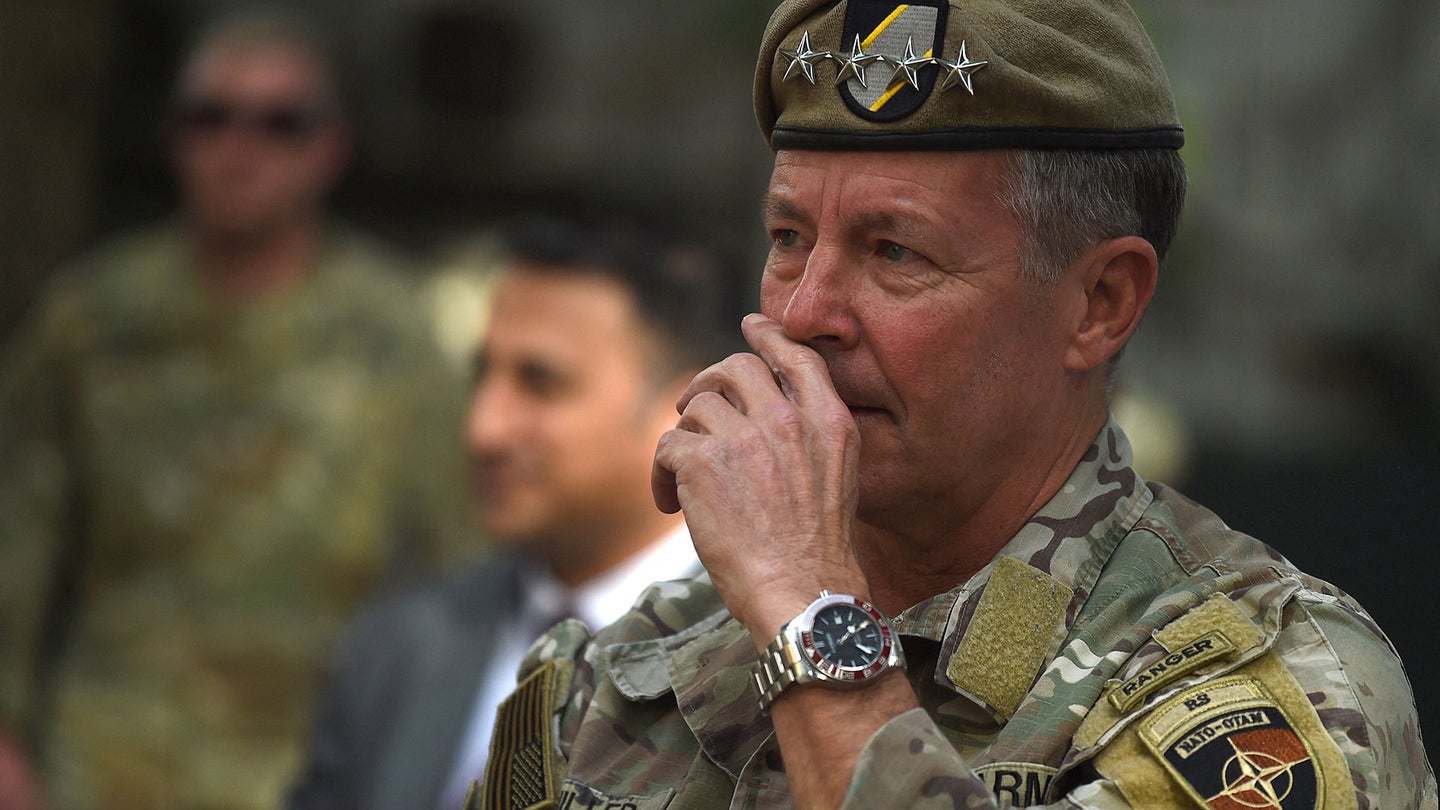 Gen. Austin "Scott" Miller, US top commander of coalition forces in Afghanistan, gestures during an official handover ceremony at the Resolute Support headquarters in the Green Zone in Kabul on July 12, 2021. (Photo by WAKIL KOHSAR / AFP) (Photo by WAKIL KOHSAR/AFP via Getty Images).
SHARE

With the Taliban in total control of Afghanistan, Americans deserve to know how the Afghan security forces collapsed in little more than a week despite a nearly 20-year and $88 billion effort by the U.S. military to train, equip, and mentor Afghan troops and police.

Army Gen. Austin “Scott” Miller, the last commander of all U.S. and allied troops in Afghanistan, could provide lawmakers with some of the answers when he testifies next week before Congress – but the broader American public won’t hear any of that. The hearing will be behind closed doors.

This enforced secrecy has become the norm for Miller and other military leaders, who made it nearly impossible to get basic information about the state of the war in Afghanistan for at least the past three presidential administrations.

Miller never briefed the Pentagon press corps while he served as the top commander in Afghanistan from September 2018 until this July. While he spoke to Afghan media often, it was rare for him to engage with American or western reporters.

After this story was first published, Pentagon spokesman John Kirby told Task & Purpose that the Senate Armed Services Committee had requested that Miller’s hearing be held in a closed session.

There may be good reasons why Miller’s hearing will not be public. That means there won’t be television cameras – which are an invitation for all lawmakers to grandstand about issues that have nothing to do with Afghanistan, such as critical race theory. (When Defense Secretary Lloyd Austin and other top defense officials testify in an open hearing scheduled for Sept. 28, expect lawmakers’ opening statements to last for hours as each senator attempts to hold the beer of the previous speaker.)

It’s also fair to say that military leaders have gone out of their way for several years to avoid any sort of conversation with the American public about what was happening in Afghanistan and why.

Army Gen. John W. Nicholson Jr., who led all U.S. and NATO troops in Afghanistan at the time, abruptly ended an August 2018 Pentagon news conference after being pressed on whether military leaders had been too optimistic when they claimed Afghanistan had turned the corner.

Reporters in the Pentagon’s briefing room, who were listening to Nicholson speak from Kabul, had no idea that he had left until one of his aides claimed, “The general had a hard stop.”

For too long, top military leaders have dealt with Afghanistan like parents trying to shield their children from any news of their impending divorce.

After former President Donald Trump took office, the military stopped releasing monthly information about how many airstrikes were being launched in Afghanistan; it stopped tracking how many Afghan districts were under government control; and when the special inspector general for Afghanistan reconstruction asked the military last year if the Taliban had broken the terms of the withdrawal agreement by attacking U.S. troops, “The question drew a classified response.”

The secrecy continued after President Joe Biden took office. Defense officials have often declined to provide a rough count of the number of troops left in Afghanistan during the drawdown, citing security reasons. Pentagon spokesman John Kirby acknowledged in late July that U.S. military aircraft were continuing to strike the Taliban, but he would not say where.

Military leaders no longer have an excuse to withhold information about what went wrong in Afghanistan now that no U.S. troops remain on the ground. They need to finally show their homework after years of claiming the dog ate it.

The war is lost. The country deserves to know why.

UPDATE: This story was updated on Sept. 10 to make clear the Senate Armed Services Committee had requested that the hearing with Army. Gen. Austin “Scott” Miller be held in a closed session.