ISIS is biding its time in Afghanistan

Six month after President Donald Trump declared victory over the ISIS "caliphate" in Iraq and Syria, the terror group continues to mount a bloody comeback across the Middle East — and Afghanistan is no exception 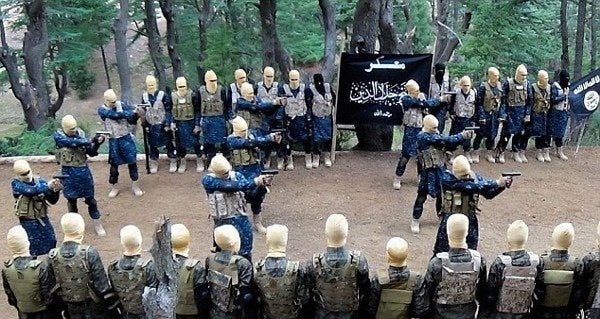 In the aftermath of the ISIS suicide bombing at a wedding reception on in Afghanistan that left 63 people dead on Saturday night, Afghan president Ashraf Ghani marked the nation's 100th independence celebration with a solemn vow to “eliminate” the terror group's strongholds across the country.

That might prove difficult. Six month after President Donald Trump declared victory over the ISIS “caliphate” in Iraq and Syria, the terror group continues to mount a bloody comeback across the Middle East — and Afghanistan is no exception.

According to the the Defense Department's June 2019 report to Congress on the security and stability situation in Afghanistan, ISIS-K — the terror group's Afghan offshoot that first appeared in the country in 2014— made significant “territorial gains” in the country's eastern provinces between December 2018 and May 2019.

More importantly, ISIS forces continue to “evade, counter, and resist sustained pressure” from not just U.S. troops but the Afghan security forces who have proven increasingly ill-equipped to ensure security and stability across the country.

Over the past few years ISIS-Khorasan continues to take a more active role in the management of regional ISIS networks in India, Bangladesh, and other areas assigned by ISIS-core, but its progress in enabling or inspiring attacks outside of Afghanistan and Pakistan very likely has been limited.

ISIS-K maintains the capability to conduct mass casualty attacks with the intent to weaken public support for the Afghan Government and the Taliban.

During this reporting period, it conducted attacks primarily against Afghan Government and security forces and election targets of opportunity.

ISIS-K also conducted several attacks in December and again in February and March against Taliban forces and ANDSF in Kunar Province aimed at expanding their territory.

In March 2019, ISIS-K launched a rocket attack against a political gathering in Kabul and a suicide attack near Jalalabad Airfield killing at least 11 and 16 people, respectively.

ISIS-K has fewer than 2,000 fighters operating in its safehaven in eastern Afghanistan.

In this period, ISIS-K remained consolidated in pockets of its primary safehaven in Nangarhar, but did make territorial gains against the Taliban in Kunar Province.

ISIS-K has certainly suffered setbacks in recent months. In April, NATO's Resolute Support mission announced that a U.S. airstrike had killed the commander of ISIS forces in northern Afghanistan. The followiing August, more than 200 ISIS fighters and a pair of top commanders even surrendered to Afghan security forces in what a spokesman for Afghan commando forces called “the end of the Islamic State in northern Afghanistan,” per the New York Times.

But the resurgence detailed in the Pentagon report also comes as the U.S. lurches towards an initial end to the 18-year-old U.S.-led military campaign against the Taliban that would involve a gradual withdrawal of U.S. troops from Afghanistan, an accord would likely create a power vacuum in which ISIS-K could consolidate itself without opposition beyond Afghan security forces.

“Even if a successful political settlement with the Taliban emerges from ongoing talks,” according to the Pentagon report,” ISIS-K] will constitute a substantial threat to the Afghan government and its citizens, as well as to the United States and its Coalition partners.”

There remains disagreement over the potential reach of a resurgent ISIS-K. While the group “remains operationally limited to South and Central Asia, the group harbors intentions to attack international targets,” the DoD report states, the U.S. military asserts that the terror offshoot “poses a threat not only to Afghanistan, but also to the West, which it continuously seeks to target for terrorist activity.”

But even if ISIS-K doesn't attain the worldwide reach its organizational predecessor in Iraq and Syria exercised at the height of its global influence, Saturday's wedding bombing indicates that ISIS will continue to terrorize Afghans for the foreseeable future — and despite his strong words, there's nothing that Afghan president Ghani can actually do about it.