The U.S. military is apparently providing some form of "limited support" for the Taliban as part of the terror group's fight against ISIS in Afghanistan 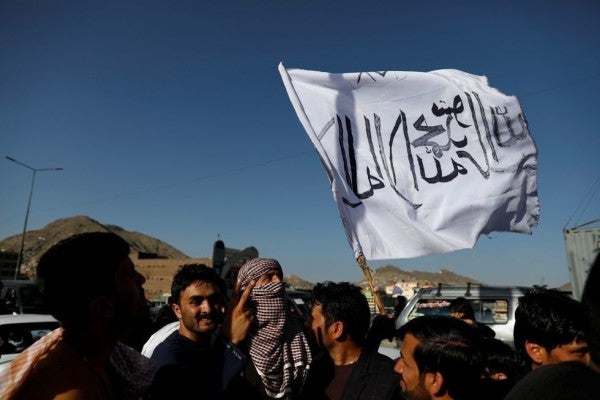 The U.S. military is apparently providing some form of “limited support” for the Taliban as part of the terror group's fight against ISIS in Afghanistan, officials revealed on Tuesday.

“Over the last several months in eastern Afghanistan, we’ve watched the Taliban compress and crush ISIS presence on the ground in southern Nangahar province, and they’ve been very effective doing that,” McKenzie said. “That’s some of the worst terrain in the world. They’ve paid a very steep price in their own fighters.”

When asked by Rep. Michael Waltz (R-Fla.) if Taliban had accomplished this independent of U.S. support, McKenzie responded that the terror group had triumphed over ISIS in Nangarhar province with “very limited support from us, and I would characterize that as very limited support” — a terse admission that the U.S. has somehow aided the Taliban in Afghanistan.

“They’ve demonstrated a capability to [defeat ISIS]. It was a bloody mess, but they did it,” McKenzie said of the Taliban. “In fact, ISIS really now no longer holds ground in Nangahar province. They’re trying to reestablish themselves up to the north in other provinces, and it remains yet to be seen whether they’re gonna be successful doing that, and we’ll know over time if they are.”

McKenzie did not elaborate on the nature of the U.S. support in question. When pressed on the matter at a Pentagon press conference later that day, Joint Staff vice director Navy Rear Adm. William D. Byrne Jr. declined to elaborate and referred questions back to CENTCOM.

When reached for comment, CENTCOM spokesman Army Maj. John Rigsbee declined to elaborate, stating that the command will “let Gen McKenzie’s comment stand on its own.”

However, a military official told Task & Purpose that “limited” support for the Taliban means two things: the suspension of air strikes on Taliban forces that were engaged in fighting with ISIS, something not discussed directly with the Taliban, and the use of “some” air strikes against known ISIS-K locations during that fighting.

Those strikes were not coordinated with the Taliban, the official said.

ISIS currently has somewhere between 2,000 and 2,500 active in Afghanistan, a decrease from an estimated 5,000 in September 2019 that U.S. Forces-Afghanistan attributes to, apart from U.S. air strikes and Afghan security forces operations, “continued fighting between IS-K and Taliban forces.”

“IS-K's stronghold in Nangarhar has been 'dismantled,'” according to a recent assessment from the Special Inspector General for Afghanistan Reconstruction.

McKenzie's revelation regarding “limited support” for Taliban anti-ISIS operations comes as the U.S. military begins drawing down troops as part of an agreement with the Taliban that could lead to all U.S. service members withdrawing from Afghanistan over the next 14 months.

The agreement calls for all U.S. and coalition troops to leave Afghanistan so long as the Taliban refuse to allow Al Qaeda to use the country as a staging base to launch terror attacks abroad.

The initial conditions-based reduction of forces will see U.S. troop levels drop to from roughly 13,000 to 8,600 over the next 135 days, according to Army Col. William “Sonny” Leggett, the top U.S. military spokesman in Afghanistan.

“USFOR-A maintains all the military means and authorities to accomplish our objectives—including conducting counterterrorism operations against Al Qaeda and ISIS-K and providing support to the Afghan National Defense and Security Forces,” Leggett said in a statement. “USFOR-A is on track to meet directed force levels while retaining the necessary capabilities.”

This article has been updated to include additional comments from a U.S. military official