“In 10 years as a JTAC, I’d never seen any kind of fire support as responsive." 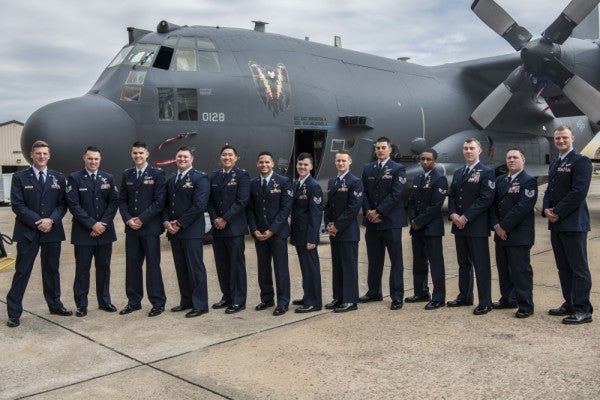 An Air Force AC-130U crew was awarded two Distinguished Flying Crosses and 12 Air Medals on Monday for phenomenal gunnery above a firefight against ISIS fighters in Afghanistan in April 2019.

The skill of the air crew made all the difference for the guys on the ground, explained Air Force Special Tactics Officer Maj. Jeffrey Wright, of the 24th Special Operations Wing, who led the fire support element of the firefight.

“I would have to reach for examples like Normandy, Iwo Jima or Hamburger Hill to appropriately convey the degree to which the enemy were prepared and ready for our assault,” Wright wrote in an account of the battle for the 1st Special Operations Wing Public Affairs Office.

The mission on the night of April 3, 2019 was to assault a notorious Islamic State – Khorisan (ISIS-K) stronghold in the Afghanistan's Nangahar Province that was so well fortified it was known as ISIS-K’s Pentagon, Wright said.

The installation was dug into the side of a mountain with only a single path through which friendly forces could assault. The base itself was “a warren,” Wright said, with underground tunnels connecting operations centers and staging areas, and well-placed barricades and apertures allowing enemy shooters to surround friendly forces and shoot down at them from all sides and angles.

On top of that, the enemy was well-trained and committed, and Wright said he knew of at least three previous assaults that were turned back by the enemy’s skill and defenses.

“In my 20-plus years of training and experience in the art of attacking and defending ground objectives, I have seen few more formidable defensive positions – or ones more daunting to attack,” Wright wrote.

Wright and his seven-man Special Tactics team were tasked with supporting the Army Special Forces company assaulting the fortification. The enemy stayed hidden until the American force drew close, Wright said, which resulted in an intense firefight where the lead elements were surrounded by enemy fire. ISIS fighters also used the underground tunnels to re-appear behind friendly forces in buildings they had already cleared, Wright said.

“Despite our numerical superiority, the situation was dire,” Wright wrote. “From my support-by-fire position, I could do little to help. The safe evacuation of the growing numbers of wounded was up to my Special Tactics teammates in close-range gun battles with the enemy – literally fighting room-to-room.”

Luckily, the crew of the AC-130U gunship, call sign Spooky 41, was there to help. The combat controller with the lead element of the Special Forces company radioed Spooky 41, and the aircrew responded immediately with accurate fire.

“In 10 years as a JTAC, I’d never seen any kind of fire support as responsive,” Wright said. “Sure enough, the first rounds were right on target – a good thing, because the enemy was so close to the assault force.”

The accurate, close-in fire was sorely needed, Wright explained, because usually the enemy tries to get so close that aircraft can’t shoot without risking friendly fire. But Spooky 41 was up to the challenge.

“The precise application of fires allowed friendly forces to establish a defensive perimeter and turn to the task of evacuating the wounded,” Wright recalled.

Still, the assault force was about to face an even greater challenge: the terrain prohibited helicopters from landing in order to whisk away wounded soldiers. Instead, the helicopters would have to perform hoist lifts on the most critical patients, an exposed maneuver which would involve hovering within machine gun range of “dozens, if not hundreds, of enemy fighters,” Wright said.

“I watched this unfold with a sense that ‘this is how it happens…this is how aircraft get shot down,’” Wright continued. “Yet, the enemy wasn’t able to get a single shot off as the patients were extracted, one by one.”

Spooky 41’s fire was so responsive and precise that the enemy couldn’t respond effectively, Wright explained. The whole time, he and his men were just barely keeping pace with fire support requests, so they were astonished by Spooky 41’s ability to do the same thing from the air.

“Looking back, I am amazed that Spooky41 managed to track everyone so effectively,” Wright said. “Even with my high degree of situational awareness as the man on the ground and with my degree of experience, I had a hard time keeping it all straight. At several points they were engaging different targets simultaneously and on different nets. I had one net in each ear – I watched and listened as they delivered salvo after salvo of fires with zero error.”

“It felt almost like a weapons school exercise, in that the degree of difficulty was so high and the number of assets so numerous that it far exceeded normal training scenarios,” he added.

Without Spooky 41’s skill, the medevac helicopters would have certainly been shot down, Wright said. But besides some initial gunshot and IED blast injuries, no further harm befell American or Afghan troops that night, he said.

“I’ve been to far too many memorials and seen far too many folded flags,” he added. “I didn’t have to do that on this trip because instead of Americans giving their lives for their country that night, Spooky41 made the enemy die for theirs – on time, on target, and in the most complex environment I’ve ever seen – training, or combat.”