Air Force Staff Sgt. Aaron Metzger was awarded the Bronze Star with a "V" device for his heroism during an hours-long firefight with Taliban militants that saw him overcome significant injuries from both grenade shrapnel and gunfire to save the lives of his teammates 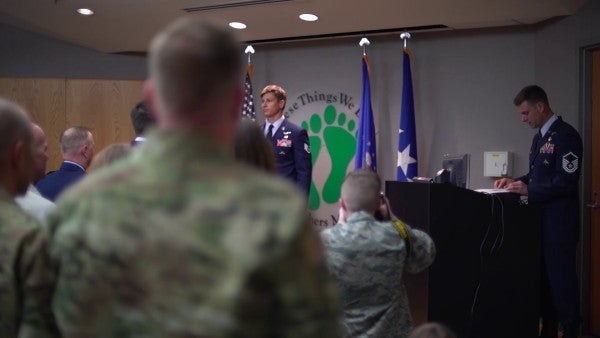 Air Force Staff Sgt. Aaron Metzger was awarded the Bronze Star with a valor device for his heroism during an hours-long firefight with Taliban militants that saw him overcome significant injuries from both grenade shrapnel and gunfire to save the lives of his teammates.

While assigned to the 83d Expeditionary Rescue Squadron, 455th Air Expeditionary Wing out of Bagram Airfield in Afghanistan, Metzger was part of an April 29, 2018 helicopter assault intended to destroy a Taliban weapons facility and disrupt the terror group's networks in the region.

During a patrol, Metzger's unit came under attack from “intense” machine gun and small arms fire from Taliban fighters positioned on a nearby ridge, according to his citation. Outflanked, the he immediately returned fire despite enemy fighters maneuvering “within five meters” of his position.

Despite his exposure to “continuous enemy fire,” Metzger maneuvered to aid two Afghan partners who were severely injured by a Taliban grenade, according to an ACC release: “Disregarding the risk to himself, he carried the two partners away from enemy fire.”

While treating partner forces, Metzger was injured by grenade shrapnel to hisi his right arm and chest, but “remained calm in order to guide a fellow teammate to perform life-saving treatment on himself,” according to his citation

Even after he was again wounded, this time by small arms fire, Metzger “refused to be carried to the medical evacuation helicopter so personnel could focus on security,” according to the release.

“The heroic action and unselfish dedication to duty displayed by Sgt. Metzger reflect great credit upon himself and the Air Force,” the citation says.

During the Monday ceremony, Metzger was surrounded not just by family, his fellow airmen from the 38th RQS, and 23rd Wing leadership, and ACC chief Holmes thanked Metzger's teammates for helping him return to duty following his injuries.

“I'm proud of the team that took part in helping Sgt. Metzger return to status because that's a tough voyage,” Holmes said. “I'm proud of the people accomplished this mission all the aspects that go into it that make it happen.”