24 Hours After Getting Shot In The Head In Afghanistan, This PJ Went Back To The Fight

There’s no way to prepare yourself for a close call except to have one. Before Jimmy Settle received a Purple... 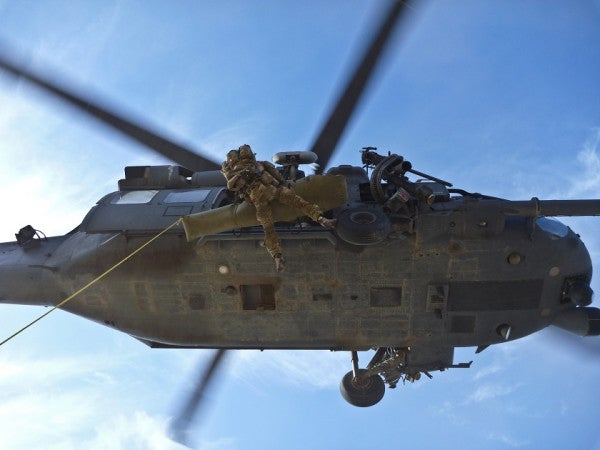 There’s no way to prepare yourself for a close call except to have one.

Before Jimmy Settle received a Purple Heart and the Airman’s Medal on the way to saving 38 lives during his military career; before he was shot in the head on a rescue mission in Afghanistan, then headed back out on missions the following day; before he penned his war memoir “Never Quit” with co-author Don Rearden, he was freezing his ass off in the black waters of Alaska’s Cook Inlet, alongside Roger Sparks, another Air National Guard pararescueman — special operations forces trained to insert into dangerous places to pull out and treat the wounded.

The two PJs, as they’re called, were training in nighttime tactical water work. It was a frigid February evening in 2010, and the mission went sideways shortly after it began.

After diving into the water, Settle and Sparks couldn’t reach the hoist cable from their helo to get pulled back up. Their comms shorted out. As the two divers were buffeted by ice floes, water kicked up by the helicopter’s prop wash collected on the aircraft and began to freeze, causing it to take on weight.

“They were hovering over our heads for 15 to 20 minutes, and we’re in tactical mode,” Settle, who served with Alaska’s 212th Pararescue Squadron from 2005 to 2012, told Task & Purpose. “Then all of a sudden it turned all its lights on, and it's way lower than it’s supposed to be, and the cable to get us is nowhere in sight, and they just took off.”

Settle and Sparks were left alone in the ocean. There was no way they could make it to shore alone. “Not a chance,” Settle said. “We’re wearing these huge bulky dry suits and you look like an astronaut, kinda.” To make matters worse, the suits had minor holes and tears from repeated use and had sprung a number of pinprick holes, which leaked frigid water into the suit.

Related: UNSUNG HEROES: Stranded In A Firefight, This Pararescueman Fought Like Hell To Save The Wounded »

About an hour later, a different helicopter arrived with backup pararescuemen onboard and lowered its hoist cable, but Settle’s hands were so frozen from the extreme cold that he couldn’t even clip the cable to his harness. The other divers hopped into the water and helped Settle and Sparks get clipped in and lifted onto the bird.

“That was a humbling day. The rescuers needed to get rescued,” Settle said. “And that was just a training day.”

Settle said the ordeal was unforeseen but invaluable preparation for his very bad day in Afghanistan later that year.

‘Motherfucker, you just got shot in the head’

A few weeks into his deployment, in November 2010, Settle and his fellow PJs rode in two helicopters out to Forward Operating Base Joyce to assist with joint operations in restive Kunar province. “The Army’s intention was to try and shut that place down during winter time and to keep bad guys from shuffling supplies and people out of the valley,” he said.

As the operation, dubbed Bulldog Bite, kicked off, there was a sense among many at FOB Joyce that it would go off without a hitch. The Army had conducted numerous similar operations in the Watapur valley.

“I stayed up all night, waiting for the mission to go down, and then right around noon the first nine-line came in,” Settle says. A nine-line — the radio call for a casualty evacuation — details the number of patients, nature of the injury, and other data like where to land.

Or, in the case of the PJs, where to hover while they rope down through enemy fire to rescue the wounded.

The nine-line listed five casualties. Three were wounded badly, another soldier had been killed, and the remaining troops were still in contact. An engine problem left Settle and his fellow PJs with one helicopter for the rescue effort. No wingman meant no overwatch and no fire support.

Jimmy Settle gives a friend the thumbs up before heading out on the first rescue mission of operation Bulldog Bite. He was shot 20 minutes later.Photo courtesy of Jimmy Settle.

Settle sat on the left side of the helo — his legs hanging over the edge, his eyes and weapon positioned covering the aircraft’s 6 o’clock to 9 o’clock — and he spotted purple smoke on the ground below, marking where the injured soldiers awaited.

As the helicopter descended, Settle saw a man in black robes step out from behind an adobe house and rattle off three shots right at the bird. Right at Settle.

“I heard a sound like a bag full of wet diapers hitting the wall at 300 miles per hour. Splat, splat, splat,” he said. “Next thing I know I’m on my back, and I can’t see, and I don’t know what’s going on, but my brain’s like: ‘Motherfucker, you just got shot in the head.’”

Snapping out of the daze, Settle’s training took over. He ripped his helmet off and began triaging his injury. He wasn’t blinded; his eyes were just covered in blood. He continued to feel around for a wound, and there it was. He had indeed been shot in the head.

One round hit the aircraft’s .50-cal machine gun, another hit the tail, and the third went through the underside of the helicopter — which had been relieved of its armored flooring to accommodate the weight of the casualties the PJs were expecting to pick up. The round fragmented as it passed through helicopter’s floor, and the pieces hit Settle in the forehead.

“In the span of a second, a million things happened,” he said. “I saw the flashes of the muzzle. I heard the sound. I’m flying through the air. I think I’m blind. I realize I’m not blind, but I realize I am injured in my forehead. And I’m trying to do my self-assessment.”

Settle’s fellow PJs began treating him, but with the pararescuemen taking fire and injuries themselves, their bird had to return to base. Settle insisted on walking off the aircraft and into the surgical trauma tent by himself, as his colleagues raced back to the helo and took off, heading back to the fight to get the wounded.

“I felt like a wussy, while my teammates were working their assess off,” Settle said. “So I kept bugging the doc to let me go back in.”

Just 24 hours after he was shot in the head, Settle was cleared and put back on alert status, waiting for the next nine-line to come in. It didn’t take long.

Thirty minutes after being cleared by the doctor, he was staging his gear in the helicopter. Dried blood stained the floor — some of it Settle’s, some of it from other injured men.

“It was a defining moment for me,” he said. “I could go home gracefully, after having been injured, or I can suck it up and truly live that motto.”

The helo lifted off.

‘It was all happening at once’

As soon as the helicopters arrived at their rescue point, “Shit went crazy,” Settle said. Communication with the ground forces was erratic: “This ground team had been decimated. Everybody who picked up the radio had gotten shot.”

Typically, Settle and another PJ from his helicopter who would have gone in to recover the wounded, but given the chaos on the ground, the senior pararescuemen in the second bird took the lead, while Settle and his aircraft provided cover.

Capt. Koaalii Bailey, a combat rescue officer, and Sparks, the PJ who dove into those frigid Alaska waters with Settle, began to hoist down. They came under heavy enemy fire. The enemy had dug in anti-aircraft guns to ambush the incoming casevac.

“It was like the Fourth of July, but instead of the fireworks going vertical, they went horizontal,” he said. “I’d never seen tracer fire come at me before, or RPGs fly through the air, and it was all happening at once.”

As Settle unloaded with his M4, the pilot of the other helicopter held the aircraft perfectly still so the two PJs on board could hoist down. “The pilot of that other helo, he had balls of steel,” Settle said. “He had RPGs, tracer fire, anti-aircraft fire coming right at him.”

Moments after Sparks and Bailey landed an RPG detonated nearby, disconnecting the cable and knocking Bailey momentarily unconscious. Once the two airmen recovered, they made their way to the wounded and set up a casualty collection — too much time would be lost, and it was too risky to race across the hillside under fire. Better to have the wounded who could move make their way to the pararescuemen. Some walked or limped with the help of friends. Others crawled.

But as the men began to tend to the injured, the two helicopters had to pull out to refuel and rearm. They had spent almost all of their ammunition providing cover to the ground forces.

“We had to leave our friends behind. That was against everything we trained for,” Settle said. “We had no power over that.”

As they were flying away, Settle could tell where the two PJs were — where his friends were — by the tracer fire and RPGs coming at their position.

“I wasn’t prepared for that kind of event,” Settle said. “It’s like, fuck, I want to be with those guys, but I’m stuck over here.”

Alone on the hillside and still under fire, Sparks and Bailey tended to the wounded and engaged the enemy with their personal weapons, fending off repeated attacks. Caught in a deadly crossfire, it was nothing short of a miracle that they survived as long as they did. Bailey called in danger-close air strikes on the enemy positions — a 2,000 bomb dropped from an F-18, and Hellfire missiles from Apache helicopters erupted the valley in fire. Miraculously, Sparks, Bailey and the soldiers on the mountainside survived the air strikes. As night fell, the enemy broke off their attack — American forces had the advantage in the dark, and the enemy knew it.

Delayed by refueling complications and aircraft damage suffered in the battle, as the sun set, Settle and his fellow rescuemen took off again, this time to pick up the remaining wounded, prioritizing the most seriously injured first.

‘Getting knocked down and taken to the extreme’

Flying back to the FOB after another harrowing mission and just 24 hours after he had been shot in the head, Settle’s mind wandered to that night in Alaska in 2010. “That whole mindset about getting knocked down and taken to the extreme” in Alaska, he said, “was an unintentional training precursor to the events that happened in Afghanistan.”

Just like before, he had come perilously close to disaster, only to return again — and jump back out into the breech. The only way to get good at it, he figured, was to do it some more.