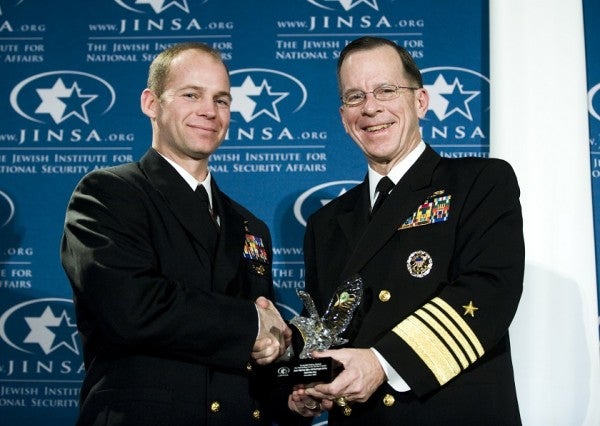 When Chief Petty Officer Douglas “Mike” Day first entered a tiny room in a raid on high-level al Qaeda militants in Iraq’s Anbar province, April 6, 2007, a bullet slammed into his body armor from less than 10 feet away.

To Day, it felt like he was hit by a sledgehammer, he explained to CBN News. The ceramic plates in his body armor are only designed to sustain impact from one round. But somehow, his body armor remained intact as it stopped another bullet, and then nine more after that, 11 bullets in all.

“After I realized that I actually was getting shot, my second thought was, ‘God get me home to my girls, and then extreme anger,” Day told Fox News. “Then I just went to work. It was muscle memory. I just did what I was trained to do.”

But the bullets kept coming, and Day’s armor couldn’t stop them all. The enemy rounds eventually tore through every part of Day’s body, including his abdomen, all of his limbs, his groin, and his buttocks. Even the bullets that were stopped by his body armor damaged his ribs and lungs.

By the time it was over, Day had been shot 16 times from a distance of within 10 feet, not counting the 11 rounds stopped by his body armor. He also suffered grenade shrapnel wounds that knocked him unconscious.

But like his resilient body armor, Day didn’t fall apart. Not only did he not leave the fight, he won the fight. His Silver Star citation reads:

Before the firefight was over, a fellow SEAL was killed by a gunshot wound to the neck, yet Day was miraculously able to walk to the medevac helicopter on his own two feet. He spent the next two years recovering from his injuries, and still suffers lingering pain on a daily basis.

Doctors have diagnosed Day with post-traumatic stress disorder, an injury he knows can be more severe than the worst physical wounds. “You lose a leg, you lose a leg. It’s a limb. You smash that brain around a little bit and who you are changes,” Day told CBN News.

At home, Day’s new mission is to help other veterans and civilians overcome traumatic brain injuries by raising funds to benefit customized treatment programs at the Brain Treatment Foundation, a nonprofit division of Carrick Brain Centers. To raise awareness of his efforts, Day swam, biked, and ran in a 70.3-mile half Ironman race April 12 in Florida, finishing with a time of 07:04:56. As of this week, Day has raised $88,075 through 1,113 donors on his CrowdRise Ironman funding webpage.

Retired from the Navy, Day now works as a full-time advocate for wounded veterans and their families with the advocacy company 9Line.

“The hand of God was on me, and I think I’m being directed now to use this story to tell people about it and use it to help other people,” Day told Fox News.

Watch Day recount the April 6, 2007, combat mission and train for this month’s triathlon in this CBN News video.