Army aviators have been reading Flightfax— the U.S. Army’s online newsletter for “aircraft mishap prevention information” — since the Vietnam... 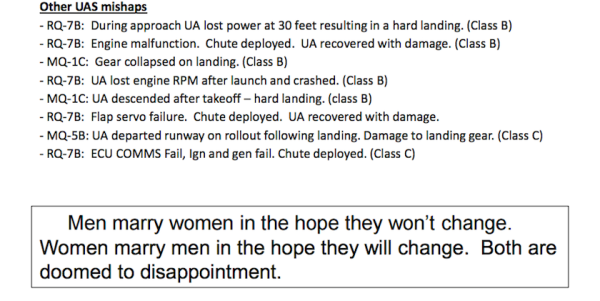 Army aviators have been reading Flightfax— the U.S. Army’s online newsletter for “aircraft mishap prevention information” — since the Vietnam War. The magazine, which is published by the Army Safety Center in Fort Rucker, Alabama, has evolved through the years and even halted production from 2007 until 2011. It offers the entire Army aviation community candid, transparent feedback following fixed- and rotary-wing mishaps. It also contains some seriously cheesy jokes.

There’s something surreal about finding Jack Handey-style humor in a magazine focused on aviation safety, especially as the most recent issue addresses a 10-day streak during which eight air crew members died in three separate accidents, prompting a nationwide safety stand down.

The one-liners are inserted on pages randomly, without any context, and may have gone unnoticed for so long because Flightfax’ readership dwindled to just over 1,500 subscribers of as the summer 2015 edition — a fraction of the readership of most military blogs.

In an email to Task & Purpose, Michael J. Negard, the director of communication and public affairs for U.S. Army Combat Readiness, said they have discontinued the use of jokes in Flightfax, “n an attempt to apply stricter editorial guidelines to ensure all content is aligned to its core purpose of preventing accidental loss.”

That said, we pulled pages from Flightfax below to highlight some of our favorite jokes hidden within the magazine’s pages.

UPDATE: This article was updated to incorporate a statement from the director of communication and public affairs for U.S. Army Combat Readiness. (1/25/2016; 2:47 pm)