What The Army Needs In A New Service Pistol

The gun enthusiast world was set buzzing recently with the news that Naval Special Warfare would be adopting the Glock... 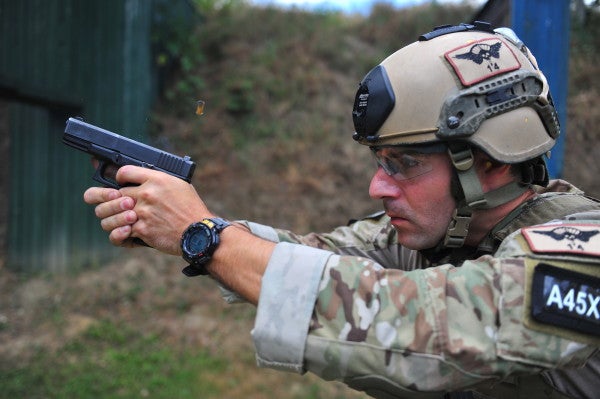 The gun enthusiast world was set buzzing recently with the news that Naval Special Warfare would be adopting the Glock 19 pistol to replace the SIG Sauer P226. The Glock has recently become prominent within the American special operations community; Rangers, Green Berets, and Air Force special operators have all informally carried variants of it. More officially, Marine Special Operations Command authorized the use of the Glock 19 for annual pistol qualifications. As the end date for solicitation bids on the Army's controversial Modular Handgun System program approaches, the Glock’s spread throughout U.S. Special Operations Command demonstrates the new standard for combat handguns.

The Glock’s status as a special operations pistol of choice is belied by its utilitarian looks and design. But the pistol’s simplicity is why it’s had such cache among elite units in the United States and around the world. The Glock’s preset striker mechanism provides a consistent amount of trigger pressure and travel unlike double action pistols such as the Beretta M9 and the Sig P226. Striker mechanisms also do not require an external hammer to be cocked before firing, as is necessary with single-action pistol designs like the M1911. The polymer frame of the Glock offers major weight savings compared to full steel designs. The compact Glock 19 most common among SOF units is small and light enough to be used in a low-visibility concealed role, yet still has a magazine capacity of 15 rounds. That’s comparable to full-size service pistols like the M9 and the P226. There’s also the Glock’s reputation for reliability, which is dramatically demonstrated in this “torture test” conducted by firearms instructor and former Delta operator, Larry Vickers.

But one of the Glock’s most defining features is also one that may prevent it from becoming the Army’s new handgun: the lack of a traditional safety. Glock pistols feature a firing pin safety and a drop safety to prevent accidental discharge from shock or sudden impact. The third safety is integrated into the trigger as a segmented part that must be pulled in conjunction with the trigger in order to fire the pistol. This differs from more traditional designs, which feature manual safeties that prevent the trigger from functioning, or double-action decockers that release the hammer and lengthen trigger travel and pressure in order to lessen the chance of a negligent discharge. But considering the role of a combat handgun, the trigger safety system is actually advantageous.

In the military, a handgun is a backup only used when a rifle or carbine is malfunctioning, out of ammo, or unavailable. When loaded, the handgun is carried in a holster or, in certain special operations roles, deep concealment. Compared to a rifle, it's more difficult to check the ready condition of a handgun. With an AR-15/M4-style weapon, a shooter can simply sweep his thumb or finger up and down to feel what position the fire selector is in. Many handguns simply don’t have that same ergonomic efficiency due to the realities of how little space there is for controls. The benefits of the trigger safety is that the shooter doesn’t have to focus on what condition the pistols is in when drawn; if a round is chambered and the trigger pulled, the weapons fires.

Considering the combat role of the handgun as a backup, this is a highly desirable quality. Concerns about safety are the same with any other firearm. As long as the fundamental rules of firearms safety are followed and proper trigger discipline maintained, a trigger safety equipped pistol is no less safe than handguns with more traditional safety mechanisms.

Of course, the Glock is not the only polymer striker-fired handgun on the market. Smith & Wesson introduced the Military & Police family of pistols in 2005. FN Herstal released the FNS series in 2011. In 2014, Heckler & Koch and Sig Sauer released the VP9 and P320, respectively. All of these handguns feature simple operation well-suited to being widely issued to a large number of troops who will have limited training time with a pistol. But the Army’s Modular Handgun System program still mandates an external safety or decocker. While gunmakers are able to add external safeties to their designs in most cases, it’s questionable if they’re needed at all. The British Ministry of Defence determined it didn’t need an external safety when it replaced the Browning Hi-Power with the Glock 17. In his criticism of the Army’s program, Sen. John McCain recommended adopting a pistol already in use by special operations.

At the very least, the Army should be considering why those units carry those pistols.