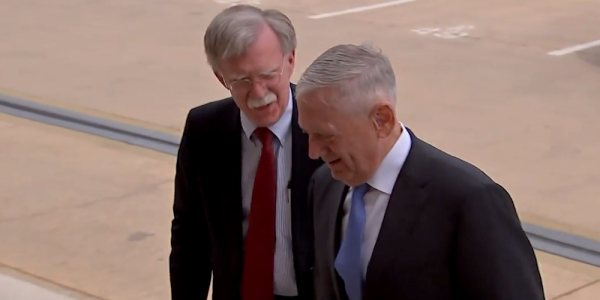 Secretary of Defense James Mattis and newly-named Trump administration national security advisor John Bolton couldn’t be more different. Mattis is known for his stolid respect to the sanctity of public service, his modesty, and his devotion to the men and women under his command; Bolton is known for his obsession with preemptive and total war and his willingness to let other people’s children die in his stead. They will not be West Wing work spouses, especially given a March 24 New York Times report that Mattis “did not know if he could work” with Trump’s replacement for ousted Lt. Gen. H.R. McMaster.

Mattis has claimed that he has “no reservations no concerns at all” about working Bolton — a hawk itching to devastate North Korea despite Mattis’ warnings that this “would constitute the worst kind of fighting in most people's lifetimes.” And so the Secretary of Defense dropped a sliver of shade upon Bolton’s face when he arrived at the Pentagon on Thursday.

“I heard that you’re actually the devil incarnate,” he told Bolton, “and I wanted to meet you.”

It may not be the conventional Mattism, but it falls nicely into SecDef’s deadpan sarcasm. But it does bring one to mine: “Be polite, be professional, but have a plan to kill everybody you meet.” We can only wonder which plan Mattis laid out with his suit and tie this morning.