Ray Mabus is arguably the most famous secretary of the Navy since Theodore Roosevelt and the era of the Great... 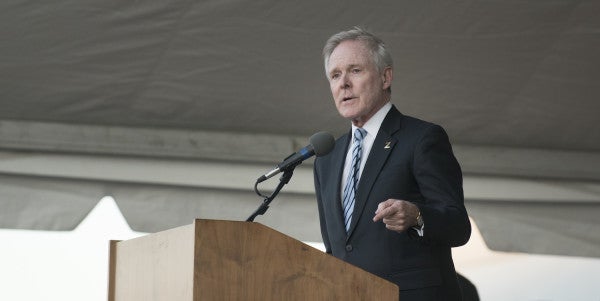 Ray Mabus is arguably the most famous secretary of the Navy since Theodore Roosevelt and the era of the Great White Fleet. It would be great if the secretary’s prominence was due to the emergence of the Navy and Marine Corps into a new era. Unfortunately, Mabus is only famous for being perhaps the most controversial Navy secretary in living memory.

It didn’t have to be this way. By themselves, most of Mabus’ pet rocks are somewhat harmless. Taken together, they aren’t so much of a “bucket list” as a “fuck it” list of things to get done before his term as secretary ends, to slightly paraphrase President Obama. While he may see the value in jamming as many initiatives through as possible before his window of opportunity is closed, those who actually have to spend their careers in the service are left wondering, “Why the hell did we do all this stuff?”

Some of his idiosyncrasies were off-putting to traditionalists. His ship-naming practices were more politically oriented than most: For example, the USS Gabrielle Giffords, named for a still-living, non-veteran congresswoman, most famous for being shot.

Then there were the things that were generally okay, but just rubbed people the wrong way. The 21st Century Sailor and Marine Program, most of which was a consolidation of existing safety and healthy-living programs, also took steps toward reducing the availability of tobacco and alcohol on base, as well as implementing alcohol breathalyzer tests at work. While touted as increasing readiness, these initiatives struck many sailors and Marines as just paternalistic.

Mabus was also sometimes dismissive of senior uniformed leadership, most notably when he publicly denounced the findings of the Marine Corps’ study on the effectiveness of women in combat. That rankled many because didn’t merely disagree, but implied bias on the part of Marine leadership, saying, “It started out with a fairly large component of the men thinking this is not a good idea and women will never be able to do this. When you start out with that mindset you're almost presupposing the outcome.”

Mabus’ preoccupation with a gender-neutral military has taken the Navy and Marine Corps to some bizarre places lately with no good reason. While he has been a prominent advocate in achieving substantive change in the status of women in the military, it’s his symbolic moves that are troubling and poorly considered. Two of his initiatives in particular seem to go past plausibility and instead pass into the realm of the “good idea fairy.” While well intentioned, he has wasted whatever goodwill he may have had in this difficult institutional task of implementing farcically unneeded measures.

The first has been underway for a couple of years now. Apparently women’s dress uniforms made them look too much like, well, women. Mabus ordered redesigned versions of female uniforms with covers and jackets resembling the traditional men’s uniform items. He mandated that female officers wear trousers during their Naval Academy graduation ceremony. Both of these were solutions in search of a problem. The secretary appeared to be more interested in uniformity than equality, trying to make a formation appear as a unisex mass.

He followed this up recently with a similarly unasked-for reform of the Navy rating system. The Navy was already trying to reduce the number of gender-specific job titles. That would have been a little controversial, but people would have gotten over it. “Aviation Ordnance Technician 3rd Class” instead of “Aviation Ordnanceman Third Class.” Okay. Whatever.

Instead of that measured approach, Mabus went much further. He eliminated the rating system altogether, and plans to move to a system of titles based solely on rank, not ratings. Sailors will be merely “seaman” or “petty officer,” and no longer addressed by rate as they are today. The existing ratings system has a long tradition. It originated with the Royal Navy and has been part of the American Navy since its inception.

While “That’s how we’ve always done it” is not a great saying to live by, the related saying, “Don’t fix something that isn’t broken” comes to mind in this particular case. Much as with the female uniform issue, Mabus decided to seek a wholly unnecessary and illusory uniformity, in this case, aligning the Navy’s system with the other services. Those services don’t have titles based on ratings because they have their own heritage and traditions.

The announced reason for going beyond the original tasking of making the rating system gender-neutral was to increase enlisted job flexibility and also easier translation of naval specialties into civilian parlance. Both of those are worthwhile goals, but could have been achieved without dismantling a tradition over two centuries old.

These titles have generations of meaning behind them in peace and war. For example, every wounded Marine for generations has called “Corpsman!” knowing that it will bring him the help he needs. Every Navy rating has a similar emotional weight for those who are in it. If the Navy gives up ratings for the sake of convenience, why not just call it the Sea Army, and turn petty officers into corporals and sergeants?

Change isn’t a bad thing, and certainly many traditions are best left behind. But change has costs, and Mabus seems determined to change the sea services into his personal vision of a nautical utopia, not change for the sake of combat effectiveness.

Perhaps the day will come when Mabus’ symbolic ideas are needed, or even welcomed, but he didn’t exercise the patience warranted in a venerable institution like the naval service. Where a few degrees of rudder change might have been helpful, he punched out the helmsman, spun the wheel about, and ordered “Damn the torpedoes! Full speed ahead!” Instead of just making hard changes for the sake of the institution, Mabus overreached, and is now just making hard changes simply for the sake of change.