On July 2, Secretary of the Navy Ray Mabus announced a sweeping change to the maternity leave policy for female... 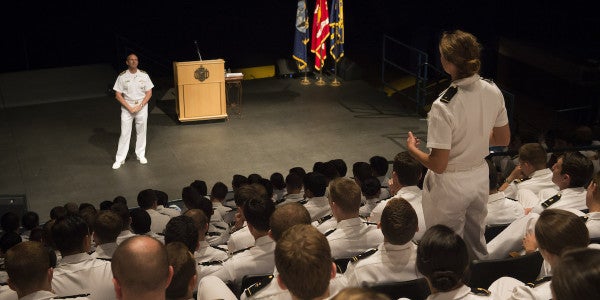 On July 2, Secretary of the Navy Ray Mabus announced a sweeping change to the maternity leave policy for female sailors and Marines, extending paid maternity leave from six to 18 weeks during the first year following a child’s birth. The change is significant in that it shows dedication to retaining women in the force, and just as important, to recruiting women in the first place.

Navy officials recognize this change as a wise investment in their female service members. It has been noted that women in the Navy are retained at half the rate as men. This change marks a concrete step to address this issue and makes service more inclusive.

While female retention is not a new concern for the services, recognizing its causes and taking steps to address them is. Vice Adm. William Moran, chief of naval personnel, told reporters as recently as May 2014 the fundamental reason behind low female retention is that “women want to start families and need more time to do so. This often makes women choose between staying in uniform and starting a family.” The new policy means that these two options are not mutually exclusive.

Mabus' official announcement was preceded by his commencement address to midshipmen at the U.S. Naval Academy in May in which he outlined many proposals, ranging from new uniforms to changes in training and increased options for sabbaticals. This speech also marked the first public mention of the forthcoming changes to the service’s maternity leave policy. At the time, Mabus proposed doubling maternity leave to 12 weeks, the ultimate aim being to extend the period of leave to all branches of the military.

This theme of supporting female sailors and Marines was echoed throughout Mabus’ speech as he outlined ways the Navy is working to improve the quality of life for servicewomen. He explained, “We’re trying to make it a more family-friendly atmosphere in the service, and allow you to not have to choose between family and service.” It’s difficult to imagine more welcoming words to young female sailors and Marines about to earn their commissions and embark on their military careers.

In the July 2 announcement, Mabus highlighted that the new policy is also beneficial to the Navy and Marine Corps services, not just the new mothers who use the leave. In essence, it’s not just a personnel issue, but also a force readiness one. “For families, increased time following the birth of child has tangible benefits for the physical and psychological health of both mother and child,” Mabus said. “For the Navy and Marine Corps, there is the likelihood that women will return to and stay in her career, yielding higher readiness and retention for the services.”

#SECNAV – "Meaningful #maternity leave is one of the best ways that we can support the women who serve our country."

To go from proposing an already-significant increase in paid maternity leave to enacting an even more dramatic tripling is momentous. Both Mabus and the department recognize that to help keep top performers, the Navy must become more family friendly.

The impetus behind this policy shift is not only to offer women more support as working parents, but also to attract more women to sea service in the first place. The new policy makes service all the more appealing when a potential sailor or Marine knows that her future employer is supportive in this way, not just in theory but also in policy.

It should be noted that a fair critique of the maternity leave policy change is that it only applies to female sailors and Marines and is not extended to adoptive parents or new fathers. However, maternity leave and parental leave are governed separately, so while Mabus has authority to expand leave for mothers, expanding leave for adoptive parents and fathers would require a change to laws set by Congress.

The Navy’s increase to 18 weeks of paid maternity leave makes the armed services among the most supportive institutions in the country for new mothers.