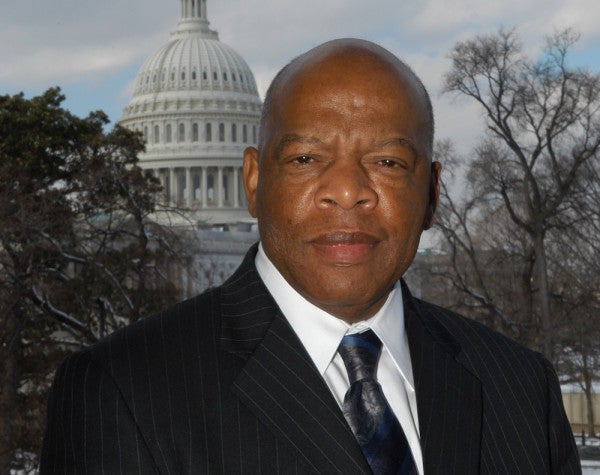 Lewis is a civil rights hero known as the last surviving member of the “Big Six,” the group of six leaders of organizations actively involved during the African-American Civil Rights Movement.

“As the first of its class, the future USNS John Lewis will play a vital role in the mission of our Navy and Marine Corps while also forging a new path in fleet replenishment,” said Mabus in a press statement. “Naming this ship after John Lewis is a fitting tribute to a man who has, from his youth, been at the forefront of progressive social and human rights movements in the U.S., directly shaping both the past and future of our nation.”

In 1960, Lewis became one of 13 original Freedom Riders — civil rights activists who rode interstate buses into the segregated southern United States in 1961 and later to challenge non-enforcement of two United States Supreme Court decisions. He was also the youngest member of the Big Six, serving as president of the Student Nonviolent Coordinating Committee from 1963 to 1966.

At age 23, Lewis was the youngest keynote speaker at the historic March on Washington in 1963. And in 1965, he led more than 600 peaceful protestors across the Edmund Pettus Bridge in Selma, Alabama.

Lewis, now 75, has worked as a Georgia congressman for 14 terms since 1987. He currently serves among the Democratic leadership and has held the positions of chief deputy whip and senior deputy whip over the course of his tenure.

The USNS John Lewis is the first ship of the next generation of fleet replenishment oilers for the Navy. It will be operated by Military Sealift Command and provide underway replenishment of fuel and stores to U.S. Navy ships at sea and jet fuel for aircraft assigned to aircraft carriers.

According to Mabus, “T-AO 205 will, for decades to come, serve as a visible symbol of the freedoms Representative Lewis holds dear, and his example will live on in the steel of that ship and in all those who will serve aboard her.”