The employment outlook for post-9/11 veterans is brighter than it has been in some time. Not only do those veterans... 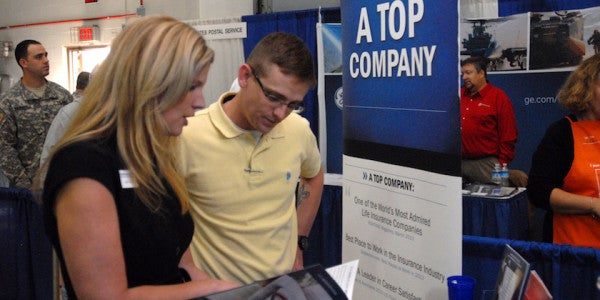 The employment outlook for post-9/11 veterans is brighter than it has been in some time. Not only do those veterans now have lower unemployment than any time in the last eight years, but their income and prospects for promotion are collectively improving, though just as for many other Americans, veterans’ desire to work full-time is not always matched by the needs of the job market.

In a previous post this August, we introduced a survey from the Center for a New American Security looking at how veterans are handling their transition out of the military. On Veterans Day, CNAS, with support from JPMorgan Chase, released a new report explaining those findings. The post-9/11 cohort faced years of high unemployment following the economic downturn of 2008–2009, triggering a number of hiring programs, like the Veteran Jobs Mission. Though unemployment for post-9/11 veterans decreased and now is nearly equal to the national average, veterans were found to have low first-year retention rates, raising concerns as to whether decreasing unemployment numbers were painting an incomplete picture.

However, though veterans often leave their first job after service relatively quickly, it turns out they usually do so for positive economic reasons — like for higher pay, better offers, and new challenges. Still, a significant minority of veterans are struggling to find their place in the civilian workforce. These veterans leave their first job for negative reasons, and many consider themselves “underemployed.” Even amongst those who are doing well economically, underemployment is widespread, with 60% of survey respondents saying that their skills are greater than what they need for their current job.

Hundreds of service members, veterans and military spouses attended a job fair hosted by Hiring Our Heroes in Tampa, Florida at the C.W. “Bill” Young Armed Forces Reserve Center on Friday, Sept. 16. To date Hiring Our Heroes, a program of the U.S. Chamber of Commerce Foundation, has assisted in veterans and military spouses obtaining more than 28,000 jobs through their events.

In light of these findings, it’s important to recognize that there are concrete steps that we can take as a society to do even better by our veterans. Further improving transition programs in the military — viewing transition as a multi-year process instead of a one-time event — will allow for the first few job transitions to occur with access to official resources, and set the stage for future success. As one veteran respondent argued, “Transition shouldn’t be ‘just in time,’ but an entire career program from service entry to separation.”

Engaging veterans with military mentorship and affinity groups, along with community groups, improves both productivity and satisfaction in the workplace and creates a network for future opportunities and support. Informal associations like these can help veterans find a good fit with their job. In the words of another veteran survey respondent, “You need to remember that you’re starting over. While you have the intangibles, such as a good work ethic and leadership skills,” veterans need to learn “the professional skills that your colleagues were working on for years while you were in uniform.”

The good news is that most veterans thrive after the military, finding success in civilian employment. Thanks to those who responded to the survey, we have a better idea of the challenges veterans face and some steps to take to confront those challenges.