On Thursday, the official Twitter account of the Department of Defense shared a short, satirical video — evidently masterminded by... 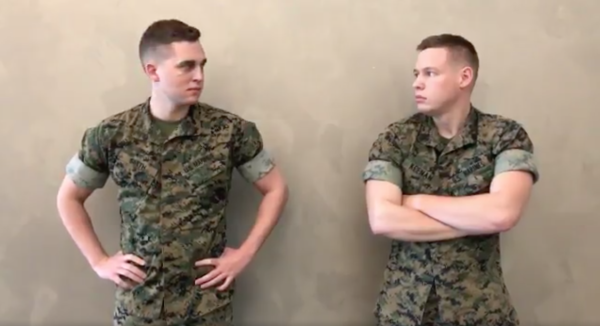 On Thursday, the official Twitter account of the Department of Defense shared a short, satirical video — evidently masterminded by some Marines — to mark National High Five Day.

Task & Purpose's resident nasty civilian, Jared Keller, and its least distinguished vet, Adam Weinstein, sat down to parse out what the hell they just watched. Here is a snippet of that conversation.

Adam: I mean, they aren’t wrong: We sailors sure do love sitting in chairs. Most of the soldiers I know aren’t really into the low-crawl, though.

Jared: These are the world’s most inefficient high fives.

Adam: Yeah, I feel like the devil dogs were pretty generous to the other services here. How many sailors and airmen do you know who expend that much energy?

Jared: I laud and commend the Pentagon for getting into the spirit, but this is like watching your father attempting to dab, or do the Harlem Shake, or some other nonsensical bullshit.

Jared: Good for them! High fives are disgusting. We all know handshakes are fucking gross, and high fives spread half as many germs as a traditional hand-to-hand greeting. So they’re still the equivalent of basically rubbing your palms across someone’s taint.

Adam: I never even heard of National High Five Day. I’m not sure it’s really what April 20 is known for.

Adam: I guess if the Pentagon press office isn’t busy with anything else…?

Jared: It’s enough to call the Pentagon PAO and ask if Mattis is feeling OK.

Jared: National High Five Day is not a real holiday, obviously. Not like the “Oh, I’m sorry honey, but Santa is actually your daddy in a polyester costume” kind of not-real, but the “Hey we made up a holiday to make you buy crap” kind of not real. Capitalism is a bitch.

Adam: Come on, what the hell are they selling? Slap-friendly gloves?

Jared: Actually, the “story” behind the today’s palm-slapping occasion is kind of nice — in 2002, a group of students at the University of Virginia started giving out “high fives and lemonade” on campus on the third Thursday in April, and the tradition slowly grew into a fundraising drive for children with chronic illnesses. But that doesn’t make it an occasion worth devoting a public affairs budget to.

Adam: Well, one, I doubt much budget went into this. Two, you just actually’d me on the origins of High Five Day.

Jared: Wanna high five on it?

Adam: You said that was nasty gross, though!

Jared: How about a fist bump? That exposes a lot less skin surface area.

Jared: Don’t make this awkward. What is this, a Pentagon spirit spot about high fiving?