After a year of deliberation, the Defense Department made the controversial decision to lift the ban on transgender service members... 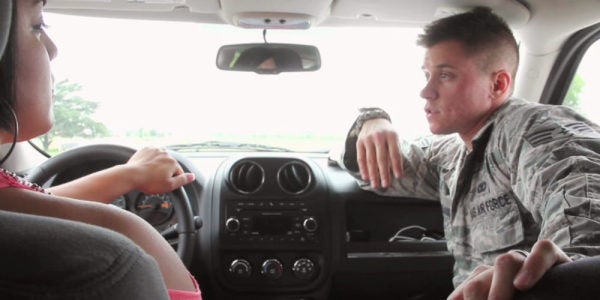 After a year of deliberation, the Defense Department made the controversial decision to lift the ban on transgender service members on June 30. The decision follows a number of inclusionary practices adopted by the military over the last few years — including the repeal of “Don’t Ask, Don’t Tell” and the move to allow women to serve in all combat positions.

Members of the LGBT community say that there is still work to be done in terms of acceptance; however, the removal of the ban was seen as a welcome change — one that makes them hopeful about a fully integrated force.

“Troops will judge you on your character and your ability. Not for what anatomy you have. This is the same thing,” Laila Ireland, a transgender Army veteran, told Task & Purpose.

She and her husband, Logan — a transgender airman — have been outspoken advocates for the military to accept all lesbian, gay, bisexual, and transgender people as service members.

“I am absolutely excited and proud about the policy change,” said Ireland. “It was anticipated that this policy change would take at least a decade.”

“People like myself can finally and will be able to continue to serve their country without pretending to be someone they're not,” she said. “Implementation and execution will be quite easy.”

While there isn’t an abundance of data on the number of transgender service members, RAND research estimates that about 2,500 people out of approximately 1.3 million active-duty service members and roughly 1,500 of 825,000 reservists identify as transgender. Up until the ban was repealed, those servicemen and women were at risk of being medically discharged.

In a press statement followed by the repeal of the ban, Defense Secretary Ash Carter said, “The policies we’re issuing today will allow us to access talent of transgender service members to strengthen accomplishment of our mission.”

Carter additionally expressed inclusionary sentiments, adding that because of this policy change, “We have to have access to 100 percent of America’s population for our all-volunteer force to be able to recruit from among them the most highly qualified — and to retain them.”

Ireland, too, is very optimistic about the assimilation of transgender service members.

However, while this is considered a big win for the transgender community, just as the repeal of Don’t Ask, Don’t Tell was for the gay community, she said that this is not a big deal for the military.

However, not everyone agrees.

Rep. Duncan Hunter, a Marine Corps veteran and Republican from California, does not support the Pentagon’s decision to lift the ban.

“This in no way whatsoever makes our military stronger or more effective,” he told Task & Purpose. “What it’s going to do is offend the majority who serve but don’t see the military as a staging ground for social experimentation.”

Chairman of the House Armed Services Committee, Rep. Mac Thornberry, a Republican from Texas, suggested, more than anything else, that readiness may be affected by the inclusion of transgender troops.

“This is the latest example of the Pentagon and the President prioritizing politics over policy,” Thornberry said in a statement. “Our military readiness — and hence, our national security — is dependent on our troops being medically ready and deployable.”

According to the Defense Department’s policy, by July 2017, the military must begin allowing transgender recruits to enlist or be commissioned into the officer corps. However, the department is more immediately tasked with coming up with an implementation policy over the next 90 days.

“We will also be looking at legislative options to address the readiness issues associated with this new policy,” Thornberry added.

Policy experts, like Palm Center Director Aaron Belkin, however, believe that the integration plan is exemplary, leaving nothing to be desired. He is also hopeful that the implementation plan currently under development will follow suit.

“Open trans service begins now; trans troops will receive all medically necessary care; gender dysphoria will be managed in the same way that the military manages all other medical conditions; and one set of rules and standards will apply evenly to all service members, regardless of gender identity,” he said in an interview with Task & Purpose, detailing the points released in the repeal.

He added, “As the research has clearly demonstrated, implementation of inclusive policy for transgender troops is not complicated. The services know exactly what to do. It really isn't hard to allow people to be honest about who they are.”

But Carter, like Belkin, is confident in the U.S. military’s ability to integrate.

“At least 18 countries already allow transgender personnel to serve openly in their militaries,” Carter said. “These include close allies such as the UK, Israel, and Australia, and we were able to study how they dealt with this issue.”

He is certain that the Defense Department will be able to adequately accommodate all service members into the military.

“I thoroughly read through the policy points and its contents,” Ireland suggested. “Like anything else, it is confusing at first. But it is a start and there will be room for improvement and polishing to make it flow easier and better for everyone, from commanders, to physicians, to the service members themselves.”