SecDef Is Pushing New Plans To Restrict Tobacco Use On Bases

In early April, Secretary of Defense Ash Carter issued a memorandum with plans to limit tobacco use among service members.... 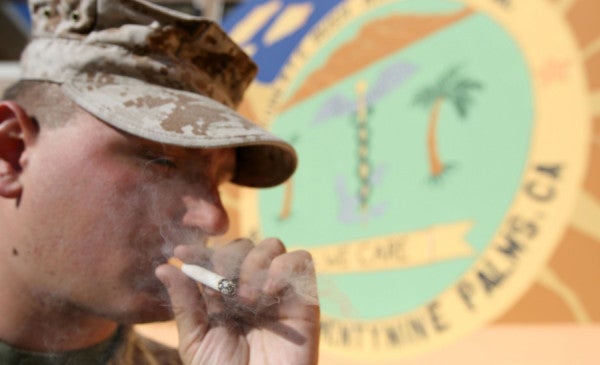 In early April, Secretary of Defense Ash Carter issued a memorandum with plans to limit tobacco use among service members. Specifically, the policy plans call for increasing the price of tobacco sold on military bases and widening smoke-free zones in areas frequented by children, according to Reuters, which saw the April 8 memo.

An anonymous defense official told Reuters that the Pentagon intends to raise the price of tobacco to take into account taxes charged in local communities, which are not charged on base. Military officials are purportedly meeting to discuss implementation methods.

Tobacco use and its associated health care and productivity loss costs the military about $1.6 billion annually, according to Pentagon data.

“That’s expected to climb to $19 billion during the next 10 years and result in 175,000 premature deaths,” Reuters reported.

In a statement, Harold P. Wimmer, national president and CEO of the American Lung Association, said, “The American Lung Association is very pleased that Secretary Carter has taken these important steps to reduce tobacco use within the Department of Defense. Reducing tobacco use will not only save lives, but also improve the health and readiness of our active-duty troops, and greatly reduce medical costs to the Veterans Administration.”

According to Wimmer, the removal of tobacco discounts will disincentivize its use among service members.

“The steps outlined by Secretary Carter are an important step in the right direction,” he said.