The military retirement system has recently been revamped in a big way. Instead of giving retirees the traditional 50% of... 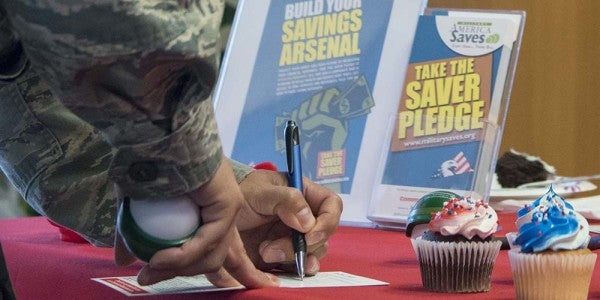 The military retirement system has recently been revamped in a big way. Instead of giving retirees the traditional 50% of base pay after 20 years of service, the new plan is a more complicated “blended system” — a mixture of a defined-benefit pension starting at 40% pay for 20 years' service, plus a 401K-style Thrift Savings Plan with matching contributions that individuals can take with them even if they leave the service early. That’s a big step forward, especially for the 83% of enlisted servicemembers who don’t stay long enough to earn the traditional 20-year pension.

But the 17% of enlisted servicemembers and 49% of officers who stay in for 20 years form much of the military’s leadership, and this change has the potential to disrupt their lives in a big way.

Currently, people leave the military at a fairly steady rate, up until the 10-year mark. But after that, they tend to stay the distance to 20 years. Very few forfeit a half-million dollars or more in retirement money once they’re more than halfway there.

This shift — towards making the 20-year pension less valuable while increasing portable retirement savings — will change that equation. If the prize at the end of the road is worth less and individuals have a decent TSP nest egg to build on, a lot more of them will take the chance to leave while they are still young. There’s now even more potential for what might be called adverse selection among those making decisions around the 10 year mark.

The majority of those new military-leavers will likely be veterans who think they can get a decent job with potential for advancement, i.e. your go-getters. This phenomenon always existed with the 20-year cliff vesting, but behavior in large groups is always the product of activity at the margins — and the new retirement system is a significant change that the military has to get “left of bang” on, before it causes manpower issues among mid-grade officers and staff NCOs.

For starters, the military can use the new retirement system as a way to get rid of personnel who are already retired — or acting like it, anyway. There’s a large number of mid-grade officers and staff NCOs who know they aren’t going anywhere, but who just punch the clock until they hit 20. That’s so common, it has its own acronym: ROAD — “retired on active duty.”

Because of the huge prize offered to lifers under the current 50%-or-nothing system, the military is generally loath to separate people after the 10-year mark. But a reduction in the “cliff” of cliff vesting means that downsizing hangers-on can become a little less cruel and more manageable. The military can get rid of some deadwood and concentrate on those continuing to give their utmost.

But the new system could offer servicemembers a lot more flexibility in their pipelines. The plan reduces the difference between the defined benefit portion of active-duty and reserve pensions — and the TSP savings are entirely portable, in and out of the military. This means there’s an opportunity to embrace alternative career paths.

Take the “Force of the Future” initiative, put out by former Defense Secretary Carter — it’s been on life support in the current administration. That program advocated restructuring career paths to allow more flexibility. The phase-in period of the new retirement system is a chance for parts of it to be resurrected.

Two major elements of his plan involved allowing career sabbaticals and increasing permeability between the active and reserve forces. It would provide members a chance to take a few years off or on weekend duty in the military to pursue outside career interests, education, or care for family. It would also allow easier transitions to and from the reserves back to active duty without negative career repercussions.

Many service members who might otherwise take advantage of unconventional career paths, whether under the current system or Force of the Future, wonder whether they’ll be left high and dry, retirement-wise, after taking any kind of a break from a cookie-cutter active-duty career track. Having a TSP nest egg makes that less of a concern. The military could even sweeten the pot by continuing to match TSP contributions under the new system during sabbaticals outside the military, perhaps making full vesting contingent upon returning. That would make such breaks popular options, rather than strange side-journeys.

As in the civilian workforce, members might transition from job to job — and come back to active duty after accumulating valuable experience, possibly while keeping their skills sharp in the reserves. That whole time, they’d still be building their retirement fund.

In the private sector, leaving a job doesn’t necessarily mean you’re dead to that company. If you go to school or take a job somewhere else, you often get a chance to come back (presuming you left on good terms), sometimes at a higher level than before. The military would be well-served by adopting a similar perspective. Retirement reform has the potential to help make this happen.

Diversity of experience and adaptability will be essential to fighting wars in the 21st century. War is no longer just about killing enemies and capturing territory. It includes fields that the American military, at least, has neglected, like cyberwarfare, sophisticated use of propaganda, and political subversion. Senior military leaders will need much broader work and educational experience than they’ve had in the past.

If done poorly, the new blended retirement system might simply be another reduction in benefits for long-serving individuals, similar to what civilian government employees have seen over the years. If done right, though, it could be an opportunity to make servicemembers smarter, more agile, and better prepared for the threats of the future, while allowing more veterans to leave the service with a sound foundation of retirement savings.