When Chris Button transitioned out of the Army after 11 years of service, he drew from the foundational skills he... 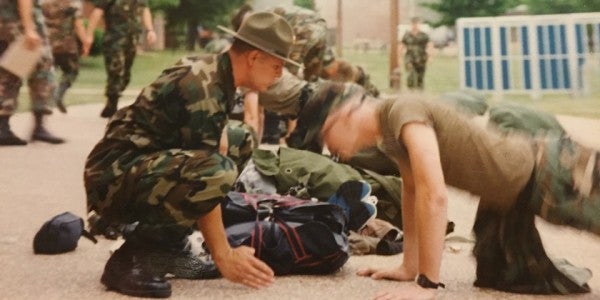 When Chris Button transitioned out of the Army after 11 years of service, he drew from the foundational skills he learned in the airborne infantry, and then as a drill instructor and combat engineer to build a successful career in the construction industry. A quick start in private industry was promising,but after two years in commercial construction management, Button found himself out of work. An advertisement in the local newspaper for a temporary position at Sodexo changed the trajectory of his future.

“I applied to a blind newspaper ad, expecting to be employed for a couple of years. It’s been 22 at the same place,” he reveals.

Button’s journey into the military started as a result of a deep-rooted love for his country and a brief, but unsuccessful attempt at higher education. “I’ve always been patriotic,” he shares. “After an expensive year of figuring out I wasn’t quite ready for college, it was clear the Army was my best path forward.” “I met with a recruiter who showed me this exciting Airborne Ranger video, and I was sold. I signed the contract immediately. My mother was not happy,” he laughs.

After serving three years on active duty as a long-range surveillance team member at Ft. Lewis, WA, Button transitioned into the Army Reserves. “I went to the Drill Sergeant Academy and then to school to learn combat engineering…bridge building, construction and demolition. I apply many of the experiences and lessons learned during my time in the military daily, it’s part of the core of who I am,” he says.

During his years in the military, Button used his time wisely, earning an Associate of Applied Science degree in Architecture, as well as bachelor’s and master’s degrees in Construction Management. “I was always working in construction while pursuing my degrees,” he remembers, “which fit well with my career path.” Now, Button is Sodexo’s Associate Director for Planning and Construction at a New York liberal arts college. He also serves as the National Communications Chair for HONOR, the Sodexo Employee Business Resource Group (EBRG) dedicated to supporting Veterans and their families.

“At Sodexo, we have very active Employee Business Resource Groups, and HONOR is committed to supporting, guiding and offering resources to veterans and their families,” he says. “HONOR is organized by employees who provide resources, training, and development, support and coordination of numerous volunteer opportunities enabling our nation’s veterans.”

Our team members participate in local and national events, support homeless veterans, volunteer at local VA Hospitals, and aid organizations like Toys for Tots and the Travis Manion Foundation. “A personal highlight for me was volunteering at the San Diego Stand Down event,” he says. “I was able to put boots on the ground and help feed more than a thousand Veterans in need – an amazing and humbling experience.” Button continued, “In another example, I was able to encourage a friend and a retired three-star general to be our keynote speaker for the HONOR national meeting. He was a big hit!”

Advocating for fellow service members at Sodexo, Button highlights some of the valuable skill sets veterans tend to have in common. “The military is mission-minded and focused, characteristics that are desirable in business,” he explains. “Service members are often success driven, and don’t like failure.” He also focused on the importance of professional development and perfecting your craft. “Everyservice member goes through continual training; that’s the way the military works,” he continues. “Basic training, job-specific training, on-the-job training, and then as you make rank, attending the courses and academies that teach leadership skills.”

Understanding the benefit of service members’ skills and experiences, Sodexo actively seeks out veterans to join its ranks. “The company has a Talent Acquisition Group with a team of recruiters dedicated to identifying veteran talent for our opportunities,” Button shares. “In addition to regular outreach, we actively recruit at Stand Down events and job fairs on bases.” Sodexo also offers a 10-week Future Leaders Veteran Internship program, inviting transitioning service members to learn on-the-job skills at various locations around the country. “The program gives veterans the opportunity to gain management training and experience while working in the fast-paced and growth-charged contract services industry,” Button says.

Button also has words of wisdom to pass along with regards to the job seeking process. “Remember that the initial triage of your resume is done in just minutes. Write the cover letter and resume to quickly connect with that other person and pique their interest. Be precise, accurate, professional and just a little personal,” he suggests.

“Your resume should be fact-based and focused, highlighting accomplishments with details and numbers wherever possible,” Button suggests. “For example, say ‘I led a 12 person team that coordinated efforts with others to achieve a goal; I improved our efficiency rating by 23%t in this area; we achieved a 100% success rate on the firing line.”He continued, “Think about things you did, and convert it into civilian terms. Instead of saying, ‘I was a demolitions expert handling C-4,’ try something like, ‘I was responsible for safely and effectively handling and employing high explosives which required a high attention to detail, a delicate touch, and some solid mathematical problem-solving skills.’” sFinally noting that, “Leadership, drive, initiative, structure balanced with flexibility, respect, maturity, and success-mindedness are all things that should be brought forward.”

Regarding the transition out of military service, Button talked about weighing the pros and cons of staying in versus getting out. He draws from his own experience to offer guidance and insight. Know when to get out, and when you make that decision to exit, “Do it sooner than later,” he advises. “Unlesstthe military is your true calling, or you are doing a job not available in the civilian world, serve your 20 years and move on. Don’t linger because you don’t haven’t come up with something different.” Button continues, “Staying in, you might get an annual 2.5% salary increase after your retirement is secure, and that doesn’t stack up well against time lost that you could have been using to solidify a second career. Be sure to use those last couple of years to strategize your transition by doing research, putting a resume together, exploring opportunities, networking and beating the bushes.”

Button finds a deep sense of meaning and purpose in his ability to continue serving the military even after more than 20 years in the corporate world. He urges fellow veterans to consider joining him at Sodexo. “I remain passionate about the military in general and the Army specifically,” he shares. “I’m able to volunteer and act as a resource, enabling others to do their great work. We have so many engaged people in Sodexo working hard to support our veterans and their families.”