Autumn Tolliver was always inspired by a deep sense of gratitude and a desire to learn and grow as a... 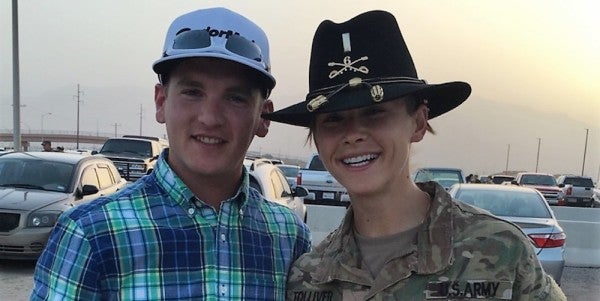 Autumn Tolliver was always inspired by a deep sense of gratitude and a desire to learn and grow as a leader. That led her to choose the path of military service.

“I am very thankful for the fact that I grew up in a free country, and I was always making sure to give back to the U.S., which is why I joined the Army,” she explains.

While she excelled in her role as an Army officer, she found the task of transitioning into the civilian world a bit daunting.

“I was very successful in the military. But once I got out, I felt like a small fish in a big pond,” Tolliver says. “It was an eye-opener, how small the Army actually is. Statistically, the Army only makes up 1 percent of the U.S. population.”

Tolliver says that in the beginning, the sheer number of options left her reeling.

“It was overwhelming at first,” she says. “I did a lot of job-searching. I had a lot of interviews. I attended hiring events. Really, I was trying to find the best job that suited me at the time.”

Tolliver first connected with Accenture in an unconventional way.

“I was reading a few articles and one caught my eye,” she says. “It was written by a womanwhodiscussed female leadership. It reminded me of my leadership lessons and training in the military, so I commented on the post.”

Little did she know her response would capture the writer’s attention as well.

“I commented that the information is not only great for female leaders, but for all leaders,” Tolliver says. “A few days later, the writer reached out to thank me.”

And just like that, one comment led to an exciting opportunity. “She said, ‘I looked at your profile. Accenture is a company actively hiring veterans.’ She asked if she could have my resume.”

The connection ended up being a great fit for both parties.

As Accenture’s military recruitment program manager, Tolliver travels to hiring and networking events, encouraging fellow veterans to consider post-military careers at the company. For an officer with a passion for leading others, the role comes naturally.

“It’s easy for me; I fell in love with Accenture,” she says. “I love the people. Everyone is a high performer, everyone wants to do well and they want others to succeed too, which is what really caught my eye. I think everyone who exits the military is scared or unsure, no matter how confident they might feel. Educating veterans on what skills translate from the field to the office can calm their nerves and help them become excited and confident to interview for any position.”

“Being eager to learn is so important,” she says. “The skills you’ve gained in the military, such as leadership, teamwork and delivering on projects, are skills that translate well in the civilian world.” That said, there is a learning curve. “You must be adaptable in so many ways,” she explains. “For example, some people get really caught up in military procedure and lingo. In the workplace, you wouldn’t address your seniors with a formality such as ‘ma’am’ or ‘sir.’”

Tolliver is also excited to share the rewarding opportunities and outstanding resources Accenture has to offer veterans.

“Accenture is unique because you have the opportunity to work on a variety of innovative projects for top companies and solve real-life problems,” she says. “Specifically for veterans, our Military Employee Resource Group acts as a support system within Accenture to enable veterans of all ages and levels to have meaningful discussions with one another, receive mentorship and participate in volunteer opportunities.”

Tolliver is on a mission to inspire and serve fellow veterans, not least by encouraging separating service members looking to begin a career after the military.

“Take the step to becoming whatever you want to be,” she says. “Continue to move forward. Be open and adaptable to changes. It will all work out. Just don’t give up.”