From Desert Storm To eBay Exec: How A Marine Launched a Successful Post-Military Career

If you ask Michael Robinson, he’ll tell you the skills and profound sense of purpose he gained while leading Marines... 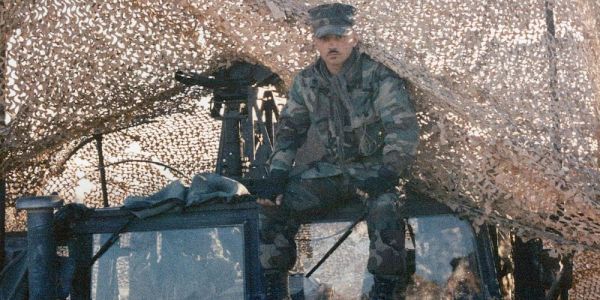 If you ask Michael Robinson, he’ll tell you the skills and profound sense of purpose he gained while leading Marines in Desert Storm helped him climb the corporate ladder in his post-military career. His journey from Platoon Sergeant to Director of Seller Tools, Programs and Services at eBay took years of personal growth, networking and understanding the value he adds to the civilian workforce.

Inspired by his father’s military journey, Robinson enlisted in the U.S. Marine Corps right out of high school.

“It seemed like a good fit for me where I was in my life at that point,” Robinson reveals. “Honestly, I don’t believe I had the right discipline at the time to be successful to go into a four-year college environment.”

He continues, “I chose the Marine Corps route and was able to build the discipline and everything I needed from the structure and support they provide. It was one of the best decisions I’ve made in my life.”

Robinson served our country for nearly a decade, contributing to the efforts in Operation Desert Storm. When the time came for him to transition out of the military in July 1991, he remembers feeling a great amount of pressure to launch a successful post-military career.

“I was still relatively young, but I was married and had a daughter. I had to find work right away to support my family,” Robinson shares.

As he traded in his uniform for a business suit, he struggled to market the skills he had gained during his years of military service.

“A lot of it was trying to identify or understand where I could fit; where I would be best suited to help a company understand the value that I could bring to the table,” Robinson explains.

“Coming straight out of the military after being in for nine years, I was competing against people who were coming out of college and had their degree,” he remembers. “The technical skills I learned as a machine gunner and platoon sergeant were not things that would transfer into hard skills in civilian life.”

After taking a closer look at his skill set, he realized many of the barriers he faced were self-imposed.

“Going head to head, I had skills and practical application with leadership experience versus someone who had gone to college directly. I was applying for the same roles and going in and selling myself against them,” he says.

In the end, Robinson’s years of leadership experience gained as a sergeant guiding young Marines helped him stand out in a crowd of applicants.

“Being a part of teams and leading teams was something I could sell myself on,” he explains. “I learned quickly those skills are very desirable for employers.”

He continues, “The way you carry yourself with the confidence you have in your abilities is something that companies really enjoy about military personnel. There is a belief in them, and you believe in yourself because you know you have the skills and you know you can make a difference.”

Robinson landed his first job after the military as a buyer in lower management for a retail company, where he learned what it takes to run a successful business. In 1999, the opportunity of a lifetime fell into Robinson’s lap when a long-time friend encouraged him to apply for a position at a local start-up company: eBay.

“My journey to eBay was through a long-time friend of mine,” Robinson recalls. “We were coaching our daughters’ softball teams together. I was working in retail, and my hours were pretty crazy. My friend said, ‘Hey, Michael, we need to get you into a regular Monday through Friday job so we can work our girls out the right way,’” he shares.

“Having someone that was on the inside that could put my name in the mix for that open role was so incredibly important,” Robinson remembers.

“The rest was selling myself as to why I was the best person for the role,” he shares. “I went in and pitched how I could lead and build teams, my understanding of the customer and retail, and I was fortunate enough to land the role.”

“From there, it just came to having new opportunities at the company and me putting myself out there. I continued to learn and grow and become an asset to the company,” he says.

“The reason I’m still here after 19 years is the purpose,” Robinson explains. “When I think about why the Marine Corps was so important to me; it’s all about the purpose. God, Country, Corps. You're fighting for something, and you're fighting with your fellow marines.”

He goes on to say, “When I look at eBay and what we’re doing, there’s such a strong core purpose to our customers to be successful in whatever their endeavor is. That connection to purpose and camaraderie that you get at the company is something that has a really strong connection for former military.”

For veterans looking to start a new career, Robinson stresses the importance of networking and understanding the inherent value service members add to the corporate world.

He says, “Don’t be afraid to ask for help. You do not have to do this on your own. With all of the social media and technology today, it’s so much easier to reach out to somebody and ask for contact information or ask to be introduced to somebody.”

Robinson urges you to think like eBay, and sell yourself.

“There’s so many different platforms out there. Use and build a network. Have the confidence in yourself and your abilities, and showcase all of the great things about you.”