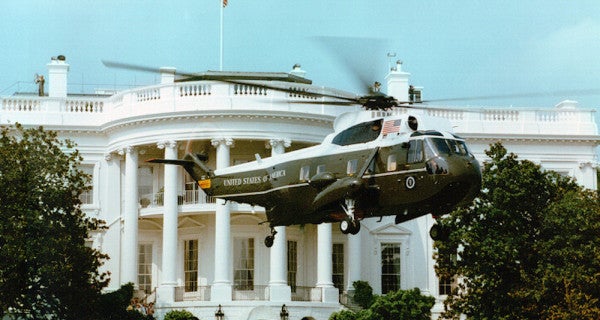 From September 2013 to April 2015, Marine Corps Staff Sgt. Branden Baker stole nearly $100,000 in night vision equipment from Marine One, the helicopter used to ferry then-President Barack Obama to and from the White House, reported The Daily Beast. He then tried to sell everything on eBay and got caught.

Baker pleaded guilty and is set to be sentenced on Aug. 11, according to a Department of Justice spokesperson. He faces up to 10 years in prison.

Over those 18 months, Baker stole “at least fifty-one image intensifier tubes and other night vision parts worth approximately $94,392 from a department and agency of the United States, specifically from Marine Helicopter Squadron-One (HMX-l), a part of the Department of the Navy,” a statement of facts in Baker’s plea agreement reads.

Records provided to Military.com say Baker first joined the Marines in 2002 and deployed three times, once to Iraq in 2008 and to Afghanistan twice in 2009 and 2010, during his service.

According to his LinkedIn profile, Baker first began training as Naval air technician in 2003 and has a technical background and experience in electronics repair, which may explain why he had access to Marine One. The president’s helicopter was kept on Marine Corps Base Quantico in Virginia, the same place where Baker serviced MV-22 Ospreys during his career in the Marine Corps.

Public records also indicate that Baker may have been reselling military equipment since 2014 as part of an under-the-table business he called “Covert Customs.” At this point, it’s unclear how much money Baker made selling the stolen equipment, though The Daily Beast suggests intensifier tubes can fetch thousands of dollars a piece.

Maybe he should have held onto some of that night vision gear. I hear prison is a pretty dark place.