On a cool morning in October 2016, U.S. Army Master Sergeant Michael Huson, then a company first sergeant assigned to... 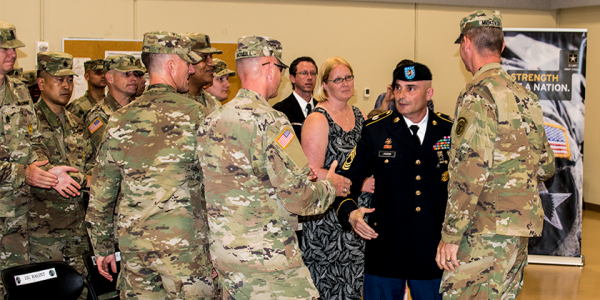 On a cool morning in October 2016, U.S. Army Master Sergeant Michael Huson, then a company first sergeant assigned to a recruiting battalion in Newark, New Jersey, was driving to work when he noticed a tractor-trailer overturned on the side of the road.

At first, Huson assumed the truck had been involved in an overnight accident and was waiting for a tow. Then he noticed that one of the tires was spinning. And there was smoke.

“That’s when I knew this just happened,” Huson told Task & Purpose. “So I pulled over.”

Huson received the Soldier’s Medal on June 6 during a ceremony at Ft. Hamilton, Brooklyn, for his actions that day, an occasion he called one of the proudest moments of his 23-year career. “Nothing compares to this,” he said. “Literally, nothing.”

Master Sgt. Michael Huson stands alongside his wife and children as Col. Gary Miskovsky presents him the Soldier's Medal.Photo by Danny Leffler

As with combat valor awards, earning the Soldier’s Medal involves certain danger. Recipients must risk their own live to save others.

When Huson approached the wrecked tractor trailer, he realized it was leaking fuel. Lots of it. But he pushed on, attempting first to kick through the windshield — “Like the movies,” he said. “My foot just stopped. I tried kicking it two or three times and nothing.”

Huson then climbed atop the vehicle and lifted open the heavy passenger-side door, advising a person nearby to call 9-11. “There was a female looking up at me, and there was a man lying on the driver-side door, which was now the floor,” he recalled.

Huson pulled the woman out of the vehicle and then entered the cab. For the next 20 minutes, he rendered aid to the man, while the fuel tank continued to leak. When first responders finally arrived, they had to cut the windshield out to extract Huson and the victim, who was too injured to move. Then Huson got back in his jeep and drove to work, blood still on his hands. “It was kind of surreal,” he said.

First introduced in 1926, the Soldier’s Medal is the Army’s highest peacetime award for valor, requiring the “same degree of heroism” as the Distinguished Flying Cross, according to the Army. Notable recipients include retired Gen. Colin Powell, former Illinois governor Otto Kerner Jr., and Alek Skarlatos, a National Guardsman who famously helped thwart a terrorist attack on a Paris-bound train in 2015.

In other words, receiving the medal is a big deal.

“This is a rare moment, a unicorn moment,” Col. Gary Miskovsky, commander of the 1st Recruiting Brigade, said during the June 6 award ceremony before an auditorium of soldiers and family members. “People will look at you differently, Master Sgt. Huson. They will look at you with admiration, and rightly so. What you did that day was above and beyond.”

“I’ve been in the Army 20 years, and this is only the third person I know who’s received this award,” said Lt. Col. Matthew Balint, commander of the New York City recruiting battalion, whose father has also received the Soldier’s Medal. “The truck could have, and eventually did, catch on fire. So, Master Sgt. Huson was really risking his own life to help those people.”

The job of recruiting entails a unique set of stressors that most people don’t realize exist. The hours are long, family time is minimal, and the pressure to meet quotas can be immense. Huson was still reeling from the deaths of two of his subordinates when the accident occurred. Both had taken their own lives.

Huson is now assigned to the Military Entrance Processing Station at Ft. Hamilton as the senior guidance counselor. His wife and two young children were present at the ceremony.

“It’s amazing,” Huson’s wife, Alisha Huson, said. “But I’m not surprised. It’s who he is. I would expect nothing less of him. That’s part of the reason I married him.”