UNSUNG HEROES: The Soldier Who Sacrificed Himself To Save A Stranger From A Suicide Bomber

On Aug. 28, 2013, a car pulled up to Forward Operating Base Ghazni in Afghanistan. When it reached the eastern... 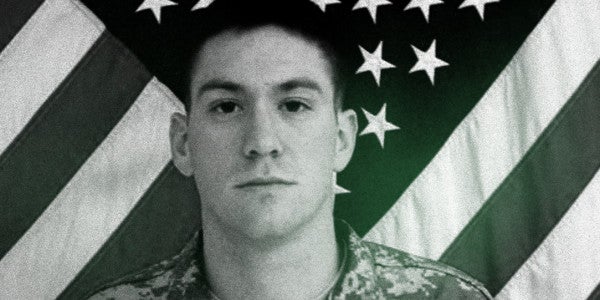 On Aug. 28, 2013, a car pulled up to Forward Operating Base Ghazni in Afghanistan. When it reached the eastern side of the base, the driver set off a 3,000-pound bomb that blew a hole in the wall.

Troops on base who ran to the blast site to aid the wounded met 10 insurgents in suicide vests, armed with assault rifles, firing mortar shells, and throwing hand grenades.

Twenty-four-year-old Staff Sgt. Michael Ollis with the 10th Mountain Division was stationed inside a bunker when the explosion went off, but took off toward the bomb blast’s smoke plume. Along the way, he joined forces with a Polish officer he did not know and a team of Special Forces soldiers, according to Military Times.

Together, the troops killed eight of the insurgents wearing suicide vests.

Someone in the group killed a ninth insurgent after he attempted to throw a grenade, and a tenth emerged from hiding. He advanced on Ollis and Polish 2nd Lt. Karol Cierpica, detonating his vest.

Ollis stepped forward, shielding Cierpica from the blast, saving the Polish lieutenant’s life, but sacrificing his own.

Ollis was posthumously awarded the Bronze Star, the Purple Heart, the Silver Star, and the Audie Murphy Medallion, as well as the Polish government’s highest military award: the Polish Medal of Honor.

“His story just shows you the character of my son, who always thought of the next guy and never really about himself,” his father Robert told Army Times.

Though the men were strangers, Ollis has become a huge facet of Cierpica’s life. His son, born Jan. 11, 2015, was named Michael for the soldier who saved his father’s life. And, in Poland, Cierpica is establishing a foundation for veterans, which will also be named for Ollis.

Since 2013, Ollis’ family has grown close with Cierpica despite the fact that they live in New York, and he lives in Poland.

“I think the relationship helps in a way because we know Michael isn't forgotten. So it helps us heal, actually,” his mother Linda said.

Earlier this year, the Defense Department announced that it would be looking into its evaluation for valor awards, including the Medal of Honor. As a result, thousands of service members and veterans previously awarded will be considered for medal upgrades. Ollis may be one of them.