A team of civilian employees from the Aviation Center of Excellence at Fort Rucker, Alabama, have developed a phone app... 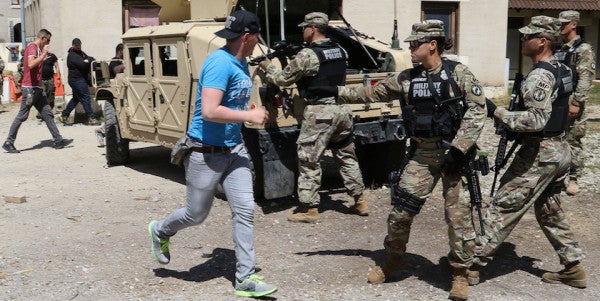 A team of civilian employees from the Aviation Center of Excellence at Fort Rucker, Alabama, have developed a phone app that will help soldiers and civilians survive an active-shooter response situation, the Army announced on July 12.

The final details of the app, the winning entry in a recent contest hosted by the Army Training and Doctrine Command, are still in flux, but the Army claims it will double as both an educational tool and a means of quickly connecting users to emergency response personnel.

Taking into account the frantic stress of suddenly finding oneself in a life-or-death situation, the app was designed to be as user-friendly as possible: Once opened, a single tap of a button will access the emergency dialer. The app then instructs users on what to do as they wait for help to arrive.

“If adrenaline kicks in and they forget what to do in the moment, all of that information is right there in front of them,” said Matt MacLaughlin of the TRADOC Senior Mobile Training Development center. “It should help everybody respond to that situation in the fastest manner possible.”

U.S. military installations have been targeted by lone gunmen on numerous occasions over the years, often with devastating results. In 2013, 34-year-old civilian contractor Aaron Alexis open fired at the Washington Navy Yard in Washington D.C. Alexis fatally shot a total of 12 people before being killed by police, making the incident the second deadliest mass murder on a U.S. military base in history. The deadliest shooting occurred in 2009, when Maj. Nidal Hasan, an Army psychiatrist and Islamic extremist, went on a shooting rampage at Fort Hood that left 13 people dead.

The active shooter response app competition was part of a broader effort by the Army to modernize the way it disseminates information. That effort is being lead by TRADOC Capability Manager — Mobile, or TCM Mobile, which, according to the Army, has so far developed 80 different apps, including ones for sexual harassment prevention, combat training, and suicide prevention. All of the apps are available at the Army’s mobile app store, the TRADOC Application Gateway.

“All these applications have the necessary and vital information that will save lives, time, and educate those with little or no training on active-shooter response situations,” said Capt. Dylan Gallagan, operations officer at the Army Office of the Provost Marshal General.

The winning entry of the active-shooter response app competition was judged based on “contest and functionality as well as design and overall user experience,” explained TCM Instructional Design Specialist Patty Dobbins. The app walks users through various steps of how to respond to an active shooter, all the way up to when law enforcement arrives.

“We’re going to try to think for you,” MacLaughlin said. “Because there’s situations where you won’t have time to think.”