It looks like the U.S. Army has fully embraced the America’s legions of gamers, but don’t start freaking out about... 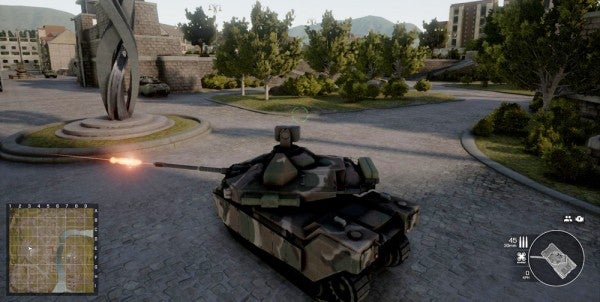 It looks like the U.S. Army has fully embraced the America’s legions of gamers, but don’t start freaking out about the endtimes just yet. In Operation Overmatch, an upcoming online video game developed by the service, two teams of eight soldiers take command of an assortment of tanks and armored vehicles and do battle with new and advanced war machines.

But Operation Overmatch isn’t all fun and games. The Army intends to monitor and solicit feedback from troops on how the up-armored killing machines they pilot in the game fare, so the service can figure out what weapon and armor concepts are worth pursuing before committing to real-life prototypes. That’s right: Soldiers can now put those hours of Battlefield to good use beta-testing for America’s next big war.

“Soldiers have the advantage of understanding how equipment, doctrine and organization will be used in the field — the strengths and weaknesses,” Michael Barnett, chief engineer at the Army Game Studio and project lead for Operation Overmatch, said in an Aug. 23 statement. “And they have immediate ideas about what to use, what to change and what to abandon — how to adapt quickly.”

Developed by the service’s Training and Doctrine Command and Army Game Studio, Operation Overmatch is a product of the Army’s Early Synthetic Prototyping effort, which the service uses to test out weapon systems and armor by letting active-duty service members work out the kinks in cyberspace first to “inform concept and capability developers.”

The pilot, in development since 2016, will feature “adversary threat platforms” and early concepts for potential weapons platforms Col. Kevin Butler with Army Capabilities and Integration Center told Task & Purpose in an email. “Players will be able to select certain capabilities (weapons, caliber, robotics, etc.) and design friendly platforms and use them in the game,” Butler said. “We expect insights on platform design, employment, and effectiveness within the game, which can serve to identify areas for further study.”

At this point, the game is still in the early testing phase, and the warfighting scenarios are restricted to urban environments. Players can outfit and equip their squad to fit their needs, choosing from thousands of options. Say a team is going up against a fortified enemy position, but the avenue of approach is too narrow, or laced with obstacles? Scrap the hulking armored personnel carriers and M1 Abrams tanks for a souped-up prototype mini-tank and pull some Fast & Furious hijinx on the digital battlefield. Hell, you can even play around with purely conceptual weapon systems, to see if they’d even work out in a real life — or near-to-real life scenario, it is a game afterall.

The military’s use of video games isn’t a new development. The Army has a history of leveraging millennial’s proclivity for first-person shooters in games, like 2002’s America’s Army, a recruiting gimmick in the form of a free-to-play shooter game that emphasized squad-level tactics. Or, 2004’s Full Spectrum Warrior, which the Army pursued with game developer THQ, as a way to test the idea of using first-person shooters as training tools.

“In a game environment, we can change the parameters or the abilities of a vehicle by keystrokes,” Lt. Col. Brian Vogt, ESP project lead with TRADOC, said in the statement.

But the focus of Operation Overmatch is less on tactics and more on gear: The Army is looking to quickly beta-test proposed or experimental weapons and vehicles without having to actually build a real-life prototype before determining whether or not it would work out well on the battlefield — and since it’s all digital, it’s a fraction of the cost.

“We can change the engine in a game environment and it could accelerate faster, consume more fuel or carry more fuel,” Vogt continued. “All these things are options within the game — we just select it, and that capability will be available for use. Of course, Army engineers will determine if the change is plausible before we put it in the scenarios.”

Online beta-testing for the game is slated to kick-off in October.