The Army may be working overtime to replace the Bradley Fighting Vehicle that's served the U.S. military since the 1980s, but that doesn't mean the tried-and-true battlewagon can't pick up some new tech in the process 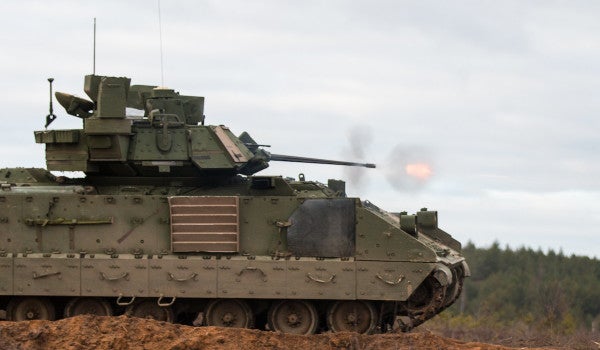 The Army may be working overtime to replace the Bradley Fighting Vehicle that's served the U.S. military since the 1980s, but that doesn't mean the tried-and-true battlewagon can't pick up some upgraded technology in the process.

The Army's Rapid Capabilities and Critical Technologies Office (RCCTO) has awarded a $32.2 million contract to BAE Systems to rapidly prototype hybrid-electric drives (HEDs) into a pair of Bradleys over the next 24 months, the service announced last week.

The HED, which consists of an upgraded engine, an electric drive motor rather than a transmission, and a cache of lithium-ion batteries, operates by converting engine power into electricity for “greater mobility and operating additional onboard equipment,” according to the Army press release.

The goal? To eventually develop a system that, when incorporated into ground combat vehicles, means more efficient power consumption, increased survivability, and a lower heat and noise signature compared to conventional gas-powered engines.

According to BAE Systems, the system's HED technology can be configured for various vehicles including the Bradley, the new BAE-developed Armored Multi-Purpose Vehicle, the M109A7 self-propelled howitzer, and the family of Multiple Launch Rocket Systems “with minor platform modifications.”

Under the terms of the new contract, the Army will provide a pair of Bradleys to BAE as surrogate vehicles for the integration of the HED system “which will then undergo contractor performance assessments, testing, and validation” before the tech is formally adopted by Program Executive Office Ground Combat Systems.

“By rapidly prototyping HEDs on a small scale, we can jump-start advanced electrification and hybridization of Army platforms, and encourage our industry partners to invest in these products to meet Army standards,” Lieutenant Gen. L. Neil Thurgood said in an Army statement.

“I think we start in our lighter tactical wheeled vehicles — I think that’s very possible in the next five to six years,” Murray said at an Associated of the United States Army event in June. “But when you start getting into a class of vehicles like an 80-ton Abrams, that’s a ways out.”