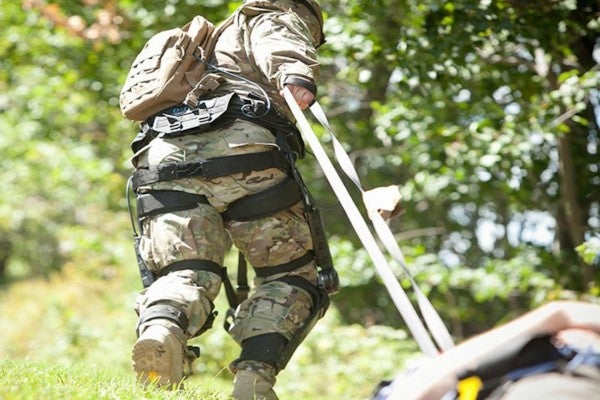 The Army is formally moving ahead with the development and fielding of a powered exoskeleton to help soldiers move faster and carry more while reducing overall fatigue after years of experimentation and testing.

“For me, it started 50 years ago when I first read Starship Troopers and said, ‘hey wait, we need a powered suit,’” Maciuba told Task & Purpose in a phone interview. “Then, three years ago, [then-Army Chief of Staff Gen. Mark] Milley called out exoskeletons as a modernization priority for soldier lethality, and he was really focused on reducing soldier load.”

The requirements, officially called an Abbreviated Capabilities Development Document, will allow Army Futures Command to pursue rapid prototyping of a brand new exoskeleton, according to Rich Cofer, a former soldier who is now the Army’s lead capabilities developer on the new project.

But don’t get too excited just yet: As Cofer put it, the project “is not an Iron Man suit” in the vein that Pentagon projects like U.S. Special Operation Command’s Tactical Assault Light Operator Suit (TALOS) have attempted to produce for the last half-century.

Related: The inside story behind the Pentagon’s ill-fated quest for a real life 'Iron Man' suit

“This is a completely different approach that we’ve taken” compared to past exoskeleton efforts, said Cofer, who spent 23 years in the Army before retiring as a sergeant first class and joining the exoskeleton project as a civil servant. “We’re in the crawl phase of the crawl-walk-run phase. It’s going to be deliberate, and we’re going to take our time to make sure we do it right, but the ultimate goal is to get equipment out as quickly as possible to soldiers.”

From a practical standpoint, this means that Army researchers are looking for a “knee-ankle-boot-type device,” Cofer said, which will allow soldiers to offset heavy loads such as extra gear or crew-served weapons, helping soldiers ruck faster and harder than ever before.

“We’re looking for a system that assists the lower body, or the upper body, or a hybrid system that combines everything and does both,” Cofer said. “We’re just not looking for something like with Iron Man that’s deflecting bullets.”

The ideal system will let soldiers “do their regular job easier than they can do it right now,” as Maciuba put it. “It allows them to do their regular job with better capabilities. More ammunition, heavier weapons … we’re making the individual soldier in small units more effective.”

To bring those capabilities to life, Army Futures Command is soliciting ideas from the defense industry in addition to seeking input from senior officials at both PEO Soldier — the Army office responsible for procuring and fielding equipment to soldiers — and the Combat Capabilities Development Command Soldier Center, but examples from industry. A December 2018 “soldier touchpoint” at Fort Drum, New York showcased the capabilities of the Dephy Exo Boot and Lockheed Martin's ONYX, two lower-body exoskeletons designed to reduce fatigue in soldiers’ legs.

“The technology that [industry] has been demonstrating is mature enough for rapid prototyping, which is why we went forward to get permission from Army Futures Command to draft requirements,” Maciuba said.

Still, the most important feedback has come from everyday soldiers who have put the next-generation gear through its paces during frequent touchpoints. Soldiers have commented on everything from the weight distribution to the feel of the equipment, feedback which has proven “invaluable” to the Army officials, Cofer said.

“When I was a soldier, I would always gripe about getting a new piece of equipment, ‘who the heck designed this thing?’” said Cofer. “Now the soldier is actually deeply involved in helping to develop this new technology.”

Indeed, Maciuba emphasized that the most important development for a future Army exoskeleton won’t be what the technology can actually do, but how soldiers adapt the suit to their needs — assuming they embrace it at all.

“It’s great to have technology that does amazing things, but if it is so fragile that it doesn't last the first day in a soldier’s hands, it’s useless,” Maciuba said. “It has to have the reliability, availability, and maintainability for soldiers to be able to trust it. It’s a culture thing: we have to provide things that, when it’s in soldiers’ hands, they don't want to give it back.”

Related: The Marine Corps is officially getting an exoskeleton to haul heavy crap like Ripley in 'Aliens'

In terms of fielding, Army Futures Command officials don’t have a set timeline beyond “as soon as possible.” The next critical phase will come with an engagement with industry this coming November, when various defense contractors will provide critical guidance as to what’s actually feasible when it comes to existing exoskeleton technology.

And that effort can’t come soon enough. As the Army modernizes amid a Pentagon-wide pivot towards “great power competition” against near-peer adversaries like Russia and China, exoskeletons are top of mind for the world’s leading militaries.

In recent years, the Russian military has showcased a variety of new exoskeleton systems, including the K-2 passive lower-body exoskeleton first publicly displayed in 2017 and the Ratnik-3 powered armor that the Kremlin showcased during an expo in 2018. Although U.S. Special Operations Command’s TALOS powered armor may have crashed and burned, Russia’s experiments in exoskeleton technology are moving full steam ahead with actual testing downrange.

“The most important development is that Russia had a chance to test its developments in Syria, and the passive model is an appropriate stop-gap measure right now — offering the soldier the capacity to carry more equipment for a longer period of time,” said Samuel Bendett, a research analyst at the Center for Naval Analyses.

While U.S. exoskeleton efforts may currently lag far behind Russia’s, Army Futures Command is looking to change that — and with some modest successes, there’s no reason why the current project couldn’t yield something more akin to the powered armor of Starship Troopers and Iron Man fame.

“The way I look at it is, why not shoot for Iron Man?” Cofer said. “You have to start somewhere.”