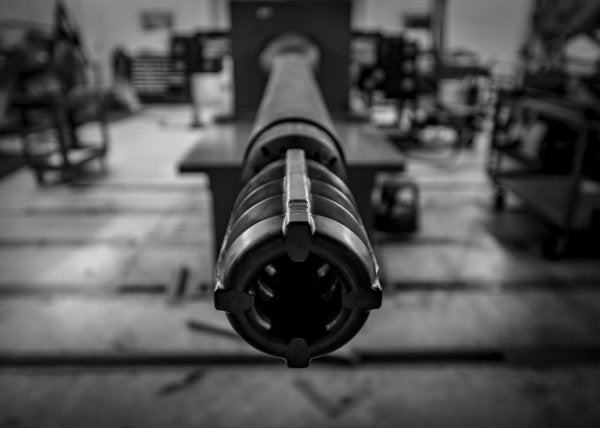 The Army is now in possession of a handful of beastly 50mm cannons to incorporate into future prototypes of its next-generation replacement for the Bradley Fighting Vehicle.

The service has taken delivery of four XM913 50mm chain guns developed by Northrop Grumman, Janes reports, with plans to acquire seven more systems ahead of an “imminent” order of 10 additional cannons for “qualification, testing, and integration activities” in 2021.

First unveiled at the Association of the U.S. Army's 2019 symposium in Washington, D.C., the XM913 is based on the 35mm Bushmaster III autocannon and designed as a key armament in the service's Next-Generation Combat Vehicle (NGCV) program.

According to Northrup Grumman, the cannon boasts twice the range of the Bradley's existing M242 25mm cannon: It can strike targets well over 4 kilometers (2.5 miles) away.

As The War Zone previously reported, the Army originally planned on doling out several XM913 cannons to various defense contractors who were working on the Optionally Manned Fighting Vehicle to replace the service's current fleet of Bradleys.

As recently at this past July, the service was working to integrate the XM913 into the Advanced Lethality and Accuracy System for Medium Caliber (ALAS-MC) system that the Army is currently working on as part of the NGCV program.

At the same time, it's unclear when, if ever, the Army will actually end up slapping the XM913 on a future ground combat vehicle: According to Janes, the service is still “weigh[ing] its cannon caliber requirements for its future Bradley replacement fleet.”

Indeed, the deliveries of the XM913 came just weeks after the Army actually issued a draft request for proposals (RFP) to industry for the preliminary design phase of OMFV program competition after initially canceling its solicitation back in January.

“We remain committed to the OMFV program as it is our second-highest modernization priority, and the need for this ground combat vehicle capability is real,” Dr. Bruce Jette, Assistant Secretary of the Army for Acquisition, Logistics, and Technology, said back in January. “It is imperative we get it right for our Soldiers.”

Here's footage of this bad boy in action: