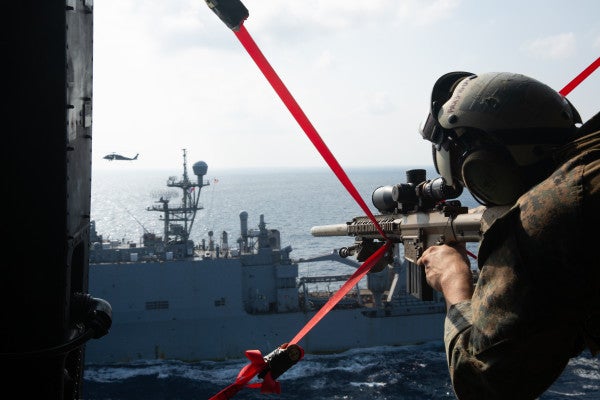 U.S. Marines conducted a simulated takedown of a hostile ship in the South China Sea last week in a supposed “flex” against Chinese claims in the hotly disputed waters, according to a press release from the service.

The USS Germantown stood in as a “foreign ship that had been identified as a non-compliant vessel transporting illicit cargo,” which was taken down by Marines assigned to the 31st Marine Expeditionary Unit's maritime raid force, the press release said.

The raid force — consisting of two platoons of reconnaissance Marines and a security element — fast-roped from helicopters onto the Germantown before cutting through simulated barriers to enter and clear the ship's passageways, according to the press release.

They detained “hostile forces” and snatched a “notional cache” of illegal weapons, the release added.

“The Commandant of the Marine Corps gave specific instruction in his planning guidance to be first on the scene, first to help, first to contain a brewing crisis, and if required to do so, first to fight,” Col. Michael Nakonieczny, commanding officer of the 31st MEU, said in the release.

“The tactical discipline and aggressive action displayed this weekend by the sailors and Marines … demonstrates to our Commandant, our allies and partners, and our adversaries that we are prepared to do just that.”

Though such operations, known as visit, board, search, and seizure missions, or VBSS, are fairly commonplace for the Marine Corps and Navy, the choice of venue is notable.

China has claimed vast areas of the South China Sea, a major shipping route with an estimated $3 trillion in trade passing through it and billions of barrels of untapped oil below the surface. Vietnam, Taiwan, Malaysia, the Philippines, and Brunei all have competing claims, according to the BBC.

Aside from holding military exercises and intimidating its neighbors in the disputed waters, Beijing has built more than two dozen island outposts in the area despite a 2016 international tribunal ruling against China's claims, a ruling which Chinese officials dismissed as a “sham.”

Relations between China and the U.S. have continued to sour over the past year. In July, Secretary of State Mike Pompeo called China's claims in the South China Sea “completely unlawful” while calling for the international community to defend the freedom of the seas.

Meanwhile, China launched two missiles into the South China Sea in August, “sending a clear warning to the United States,” according to the South China Morning Post. The provocative move came one day after the Chinese Defense Ministry accused an American U-2 spy plane of “trespass[ing]” into its airspace.

Also that month, the Trump administration banned two dozen Chinese companies from buying American products, according to The New York Times, citing their role in constructing artificial islands in the South China Sea. It also imposed visa restrictions on Chinese citizens over the practice.

According to the Marine press release, the Marines embarked on three ships assigned to the America Amphibious Readiness Group “operated in the South China Sea for a short time before moving on to continue planned exercises elsewhere in the region.”

The press release was also accompanied by a photograph of four Marines flexing their biceps, the waters behind them.

“Marines flex in the South China Sea,” the caption read.

Related: The Navy is on a mission to troll Beijing out of the South China Sea