US Navy to China: ‘You don’t want to play laser tag with us’

The U.S. Navy has issued an unusual warning to China following the lasering of a U.S. patrol aircraft last week 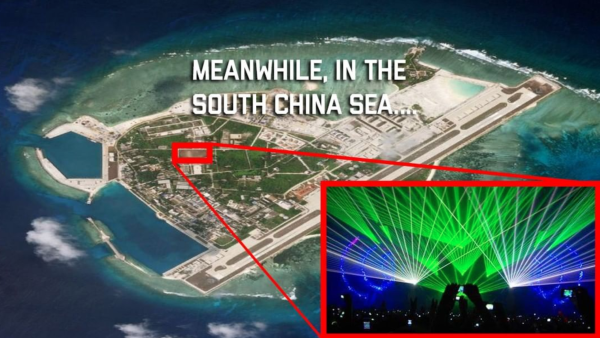 The U.S. Navy has issued an unusual warning to China following the lasering of a U.S. patrol aircraft last week: If you come at the king, you'd best not miss.

The Navy on Thursday accused a Chinese destroyer of firing a weapons-grade laser at a P-8A Poseidon patrol plane in the Philippine Sea some 350 miles west of Guam in an “unsafe” incident.

The following day, the service's official Instagram issued something of a warning to the Chinese military: “You don't want to play laser tag with us.”

The Instagram post features an aerial photograph of the Chinese military outpost Woody Island in the South China Sea with an inset of a laser light show that, according to The War Zone, is a free rave-themed desktop background.

This isn't the first time that the U.S. military has had to tangle with Chinese laser weapons. In May 2018, a pair of C-130 pilots suffered minor injuries after their aircraft was targeted with a laser system from a Chinese military base in Djibouti.

“This activity poses a true threat to our airmen,” then-Chief Pentagon spokeswoman Dana White told reporters at the time. “Our concern is the safety of our service members, and so we have raised the issue with China and we expect China to investigate it.”

As for the South China Sea, the War Zone notes that the Australian military has had to contend with Chinese lasers in multiple incidents over the last year alone.

It's unclear exactly what this sort of retaliation from Navy that “laser tag” implies. The service recently completed the installation of the non-lethal Optical Dazzling Interdictor, Navy (ODIN) laser weapons system aboard the Arleigh Burke-class destroyer USS Dewey in February.

But as The War Zone points out, both the U.S. and China are supposedly abide by the Code for Unplanned Encounters at Sea (CUES), which explicitly prohibits the sort of behavior described by the U.S. Navy in its Instagram post.

Given that CUES isn't legally blinding, it appears it's only a matter of time until freedom of navigation operations in the South China Sea resemble a Pink Floyd laser show. But that, of course, is up to the whether the U.S. tasks its own lasers to harass Chinese personnel in the same way.

As one commenter on the Navy's Instagram post put it: “Can’t really take CUES seriously if you mock it and threaten retaliation.”