A Navy destroyer recently got a major power-up when a laser was installed during a recent dry dock period, the service announced in on Thursday 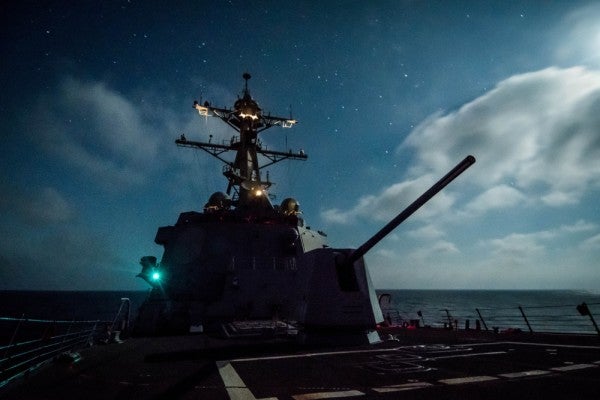 A Navy destroyer recently got a major power-up when a laser was installed during a recent dry dock period, the service announced on Thursday.

In the family of Navy lasers, ODIN is on the low-end, non-lethal side of the spectrum, USNI News explained last year, working to jam or confuse drones rather than burn through them.

While the Navy eventually hopes to engineer lasers that can burn through the nose cones of enemy anti-ship missiles, the service's newest destroyers currently do not have enough power to fire the higher-end systems, according to a Congressional Research Service report on Navy lasers published in December.

For now, ODIN is an excellent first step towards being able to knock out waves of incoming drones without running out of ammo or using up expensive missiles, according to Naval Sea Systems Command.

“The system allows the Navy to rapidly deploy an important, new capability to the Navy’s surface force in combating [unmanned aerial systems] threats,” NAVSEA said in a statement. “UAS production and employment has increased significantly, and ODIN was developed to counter these threats.”

That development is happening in double-time: ODIN was still on the drawing board a mere two-and-a-half-years ago, NAVSEA said. Now it’s on the USS Dewey and ready to rock.

NAVSEA said the ODIN program “will have all units operational within the fleet” within the next couple years.

A NAVSEA spokeswoman told Task & Purpose that the install happened in November 2019, a fact which The War Zone had deduced from pictures taken of the Dewey at the time. The spokeswoman declined to say how many units the Navy expects to install and which ships will carry them.