The Navy’s futuristic stealth destroyer is finally ready for action, sort of

More than three years after the $7.8 billion USS Zumwalt (DDG 1000) was first commissioned in Baltimore, Maryland, the Navy has finally accepted delivery of the new surface combatant 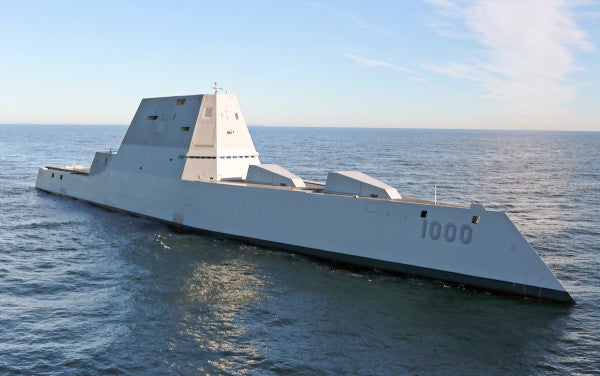 More than three years after the $7.8 billion USS Zumwalt (DDG 1000) was first commissioned in Baltimore, Maryland, the Navy has finally accepted delivery of the new surface combatant, the service announced on Friday.

The acceptance follows the much-anticipated installation and activation of the Zumwalt's combat systems in a long-awaited milestone for what the service has billed as ” the lead ship of the Navy's next-generation of multi-mission surface combatants.”

While the Zumwalt will now officially join the U.S. Pacific Fleet battle force and will count towards the Navy's total count of battle-ready hulls, USNI News reports that the vessel “will still continue conducting at-sea developmental and integrated testing” ahead of potentially reaching initial operational capability sometime next year.

Indeed, the Navy announced that the Zumwalt will remain assigned to the newly-established Surface Development Squadron One to “operate as a key enabler in the acceleration of new warfighting capabilities and rapid development and validation of operational tactics, techniques, and procedures,” according to the NAVSEA statement.

In short: Don't expect to see the Zumwalt rolling deep alongside a carrier strike group anytime soon — and with good reason, considering the ongoing hangups with the advanced vessel's weapons systems.

But as the vessel became plagued by cost overruns and technical issues during the course of its development, the cost of the LRLAP skyrocketed from $50,000 to $566,000 apiece, so far that the $505 million AGS now stands “all but abandoned” by the Navy after being delivered to the service in an “inactive state.”

Indeed, those cost overruns spurred the Navy to not just reduce its original Zumwalt-class destroyer buy from 28 hulls to just three but also transition the Zumwalt itself from shore bombardment to anti-ship surface warfare missions.

And the vessel's effectiveness at even those missions remains suspect. Indeed, the latest evaluation of the Zumwalt's self-defense systems conducted by the Pentagon's operational testing and evaluation arm in fiscal year 2019 revealed “severe problems” during the vessel's Self-Defense Test Ship events that will “adversely affect the operational effectiveness of the combat system if not corrected.”

Despite those issue, Zumwalt officials seem confident that the the next-generation warship will eventually joint the fleet as a full-fledged surface combatant sooner rather than later.

“Every day the ship is at sea, the officers and crew learn more about her capability, and can immediately inform the continued development of tactics, techniques, and procedures to not only integrate Zumwalt into the fleet, but to advance the Navy's understanding of operations with a stealth destroyer,” Zumwalt commanding officer Capt. Andrew Carlson said in a statement.

“After sailing over 9000 miles and 100 days at sea in 2019, we are absolutely looking forward to more aggressive at-sea testing and validation of the combat systems leading to achievement of initial operational capability.”