Three years after a deadly collision, the USS Fitzgerald is heading back out to sea

"We are excited to take the next step to get Fitzgerald back out to sea where the ship belongs." 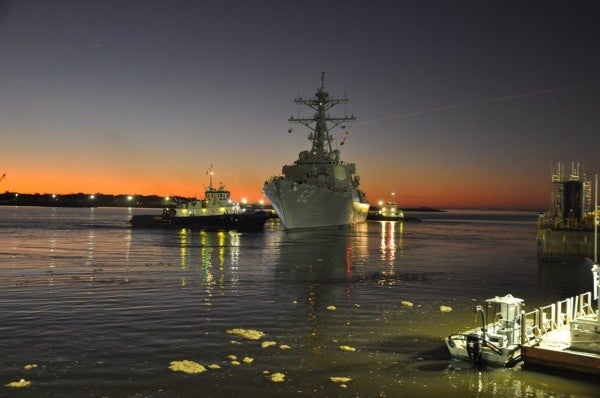 The guided-missile destroyer USS Fitzgerald is heading back to sea nearly three years after it was involved in a collision that killed seven sailors and seriously damaged the ship's starboard side, the Navy said in a press release on Monday. The Fitzgerald will undergo sea-testing to make sure the ship is ready to return to duty this spring, the Navy said.

“Since we launched the ship this past April our efforts have focused on restoring ship systems, conducting pier side tests and readying the ship for sea,” said Rear Adm. Tom Anderson, NAVSEA director Surface Ship Maintenance and Modernization and commander, Navy Regional Maintenance Center.

“The government and industry team has been working hand-in-hand on this exceptionally complex effort, with a common purpose of returning Fitzgerald to sea and ultimately back to the Fleet,” Anderson added.

The Fitzgerald was repaired at the Huntington Ingalls Industries-Ingalls Shipbuilding's Pascagoula shipyard in Pascagoula, Miss. Pascagoula is about 7,000 miles away from the southern coast of Japan, where, at 2:30 a.m. on June 16, 2017, the Fitzgerald collided with a merchant vessel four times its size.

The incident, and a second, separate collision two months later that killed 10 sailors aboard the USS John S. McCain, prompted an investigation and a wave of soul-searching within the Navy surface warfare community. The McCain left its Japan port for sea testing in December.

As the Fitzgerald underwent repairs, the lawyers of its former commander, Cmdr. Bryce Benson, claimed the Navy had publicly scapegoated Benson for the collision. In 2018, a military judge even said that comments about Benson made by Chief of Naval Operations John Richardson and Vice Chief of Naval Operations Adm. Bill Moran “ignored the accused's presumption of innocence.”

Despite the comments, the Navy allowed Benson to retire at his current rank, ProPublica first reported in November. Meanwhile, the Navy said it hopes to test the Fitzgerald's navigation, damage control, mechanical and electrical systems, combat systems, communications, propulsion and other systems. Its new commander is enthusiastic to get started.

“We are excited to take the next step to get Fitzgerald back out to sea where the ship belongs. My crew is looking forward to moving onboard the ship and continuing our training to ensure we are ready to return to the fleet,” said Cmdr. Scott Wilbur, Fitzgerald's commanding officer.