50 sailors on USS John S. McCain honored for their bravery during 2017 collision

The Navy has awarded fifty sailors for "their bravery and contributions to damage control efforts" after a 2017 collision between the USS John McCain and a merchant ship. 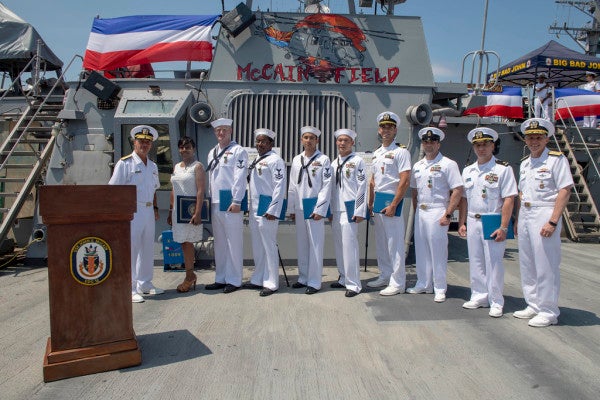 The Navy has awarded fifty sailors for “their bravery and contributions to damage control efforts” after a 2017 collision between the USS John McCain and a merchant ship.

The Arleigh Burke-class destroyer collided with a 600-foot oil tanker near the Strait of Malacca on Aug. 21, 2017. Ten sailors died as a result of the crash.

After the collision, the McCain's crew “fought back against progressive flooding across numerous spaces for hours on end,” a Navy press release said.

“To commemorate on this ship what these men and women did is both notable and fitting, because the memory of their actions represent the toughness and pride of our Navy,” Adm. John Aquilino, commander of U.S. Pacific Fleet, said in a ceremony on Wednesday.

“It also helps remind the next generation of Sailors the moral character, personal sacrifice, and selfless commitment required to not give up the ship.”

The full list of those who were recognized for their efforts is below.