The Trump administration plans on housing around 1,400 unaccompanied migrant children detained at the U.S.-Mexico border at Fort Sill in Oklahoma, officials announced on Tuesday 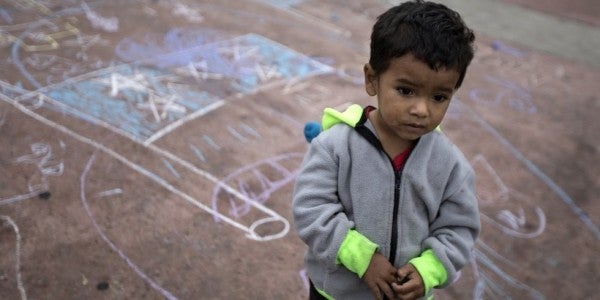 The Trump administration plans on housing around 1,400 unaccompanied migrant children detained at the U.S.-Mexico border at Fort Sill in Oklahoma, officials announced on Tuesday.

Department of Health and Human Services officials had preciously assessed Malmstrom Air Force Base in Montana and Fort Benning in Georgia to serve as a temporary shelter for children under the age of 17 while HHS works to identify sponsors, according to Military Times.

“No children will arrive before the facilities are prepared to safely house and care for incoming minors,” HHS told Military Times in a statement.

This isn't he first time Fort Sill has hosted unaccompanied migrant children: In 2014, the Obama administration placed roughly 7,700 children at bases in three states, including 2,000 at Fort Sill, for several months.

HHS, which currently operates roughly 168 housing facilities in 23 states, recently asked Congress for an emergency infusion of $3 billion to boost it capacity to housing migrant children, according to Military Times.

In June 2018, HHS requested the Pentagon find room on U.S. military bases to house up to 20,000 unaccompanied migrant children.

By December, the U.S. government had roughly 15,000 migrant children in custody, pushing the existing national network of more than 100 federally-contracted shelters to capacity.

SEE ALSO: Housing A Separated Migrant Child Costs The US More Than An Admiral's BAH

The U.S. military may no longer track how much territory the Afghan …