Is Rick Perry Right In Calling Up The National Guard To Defend Our Border?

Texas Republican Gov. Rick Perry’s recent decision to call up the National Guard to stem the flow of migrants illegally... 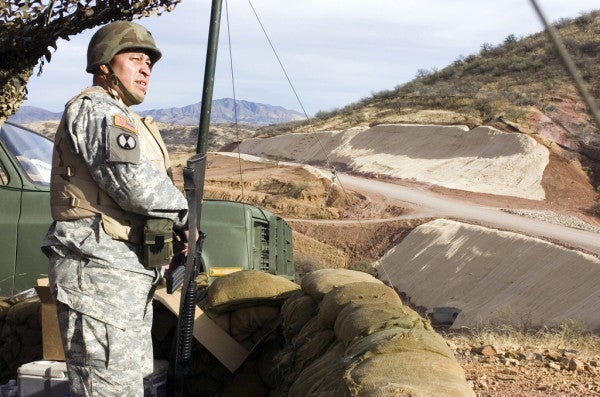 Texas Republican Gov. Rick Perry’s recent decision to call up the National Guard to stem the flow of migrants illegally crossing the border brings up several hot button issues. Whose responsibility is it to guard U.S. borders? Should the military be involved in such a mission? What do we do with the thousands of people, many of them unaccompanied minors, coming over the border? How do we turn them back when most are simply seeking greater freedoms, economic opportunity, or fleeing dangerous situations in their home countries?

More than 57,000 minors have illegally crossed the border since the beginning of the year. However, according to a Washington Post report last week, the 2014 budget for the Department of Health and Human Services — the organization responsible for processing and caring for these minors crossing the border — only provided enough funding to handle up to 60,000 children for the entire year. After the number of minors crossing the border spiked in the spring, Border Patrol assessments estimated that more than 90,000 children could arrive in the country by the end of September.

Given that the White House is now under immense pressure to put forward a solution to curb the number of individuals crossing the border, as well as resolve the question of what to do with all of the minors already here, the key question then becomes who should be guarding the border. I would argue it should be whoever can get the job done. Period. However, the issue is more complex than this. The role of the military when deployed domestically is often complicated by conflicting priorities, competing jurisdictions and, of course, political considerations. As one would expect, there are a myriad of opinions both for and against such an action in the case of this current border crisis.

For example, Rep. Joaquin Castro, a Democrat from San Antonio, said Perry is “militarizing our border.” Castro further contended that this should be treated as a humanitarian crisis. Perhaps he does not realize that even in humanitarian assistance situations, the military plays a significant role in securing the border regions so that the Border Patrol and deployed humanitarian assistance organizations can to their jobs most effectively. Perry’s office has reiterated this, saying that the National Guard will be deployed to secure the area from armed smugglers and cartel members who fire across and continue to destabilize the border.

There is also the issue of manpower. Border Patrol currently cannot handle the number of migrants currently crossing the border and, at the same time, conduct their law enforcement duties against the cartel members and other criminals committing illegal acts in the border areas. Perry pointed this out when pressed to explain the National Guard’s mission, saying the National Guard would act as a “force multiplier” for the Border Patrol to help combat the criminal elements.

I think the opposition, in general, is born of political and personal convictions and not the facts on the ground. The facts are we have thousands of people pouring into the country without a government infrastructure capable of effectively processing them all.

Therefore, as a short-term solution, the National Guard should be used to help the Border Patrol secure the border, and deter criminal activity, while a longer term solution to the lack of manpower can be resolved. When defending your position, if the defenses start to buckle, what do you do? Send reinforcements.

This is exactly what Perry has done. His state’s border is failing. Absent any solution from the federal government, he has taken action and is sending the National Guard to act as reinforcements for the Border Patrol. This seems like a proactive step to begin dealing with this flood of migrants. However, this is an action that will most certainly have consequences. People will be stopped at the border. Children will be prevented from entering the country. This is heartbreaking. Painful. Tragic. And, yet, necessary.

The question is then, do the American people understand these consequences? Are our leaders prepared to deal with them? In recent reports, the president seems to be considering the same maneuver as Perry. So, perhaps with this current crisis reaching a tipping point, the answers may be forthcoming.

Eric Navarro is a combat veteran, having served two tours in Iraq. Now a Major in the USMC Reserves, he is also the author of “God Willing: My Wild Ride with the New Iraqi Army.” Follow Eric on Twitter@ericnavarro.