The Peacetime Army Will Be Just Fine

In a Washington Post article, retired Lt. Gen. David W. Barno recently wrote that the Army’s transition from two of... 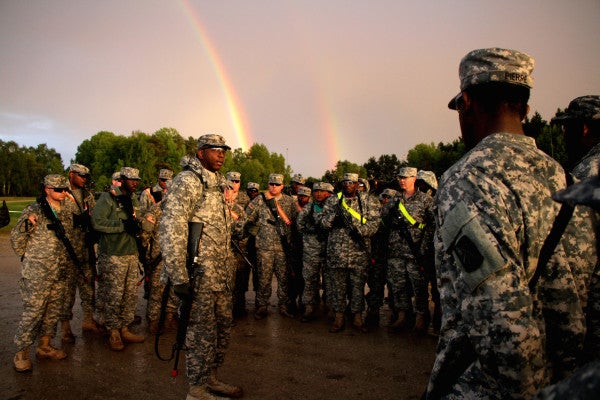 In a Washington Post article, retired Lt. Gen. David W. Barno recently wrote that the Army’s transition from two of the longest wars in U.S. history to relative peace at home “…could weaken the Army’s warfighting capabilities and drive talented, combat-experienced young leaders from the force.”

In other words, without a war to fight and a steady flow of funding, support and latitude with which to fight it, millennial generation officers and noncommissioned officers — junior majors and below and some younger noncommissioned officers — may take their talents elsewhere. They will grow weary of garrison life with its arbitrary rules, bureaucracy and email. And without staunch senior leadership support of mission command and the trust it requires, this combat-effective leadership philosophy and its practitioners both will disappear.

Yet, mission command and young Army leaders can survive, if not thrive, in a time of peace. The new, post-war situation these leaders find themselves in does not slam the brakes on what they have done all these years. The opportunities to lead in an ambiguous environment still exists. Officers will remain in the ranks if peacetime problems are reframed as real leadership challenges and not a romanticized return to the boot-shining days of yesteryear.

In the resource-constrained environment of 2014, mission command finds a new home. Exercising disciplined initiative to maneuver around the bureaucratic obstacles of garrison life that Barno describes is at the heart of the mission command concept. According to the Army Doctrine Publication 6-0, the philosophy of mission command is “the exercise of authority and direction by the commander using mission orders to enable disciplined initiative within the commander’s intent to empower agile and adaptive leaders in the conduct of unified land operations.”

Unfortunately, the words “garrison” and “peacetime” are never used in the manual. For mission command to survive, senior leaders must be careful to reframe the problems of peace in the same terms and with the same urgency as combat operations. They must also maintain the trust they developed downrange with their young officers so that they can let the reins loose and allow their young leaders to lead. Extended garrison time may be new and uncomfortable to the company grade officer, but so was his first deployment.

The tenets of mission command may also have been new and uncomfortable to the current crop of senior Army leaders when it first came to fore in the Army Field Manual 6-0, in August 2003. The manual’s predecessor, FM 101-5, 31 May 1997, does not use the phrase “mission command” at all. The manual issued prior to this in 1984 was sans mission command as well. The current version of the leadership philosophy has not been around in the Army for very long. So, of course, many fear that senior leaders will want to slip back into what they grew up with: command and control, detailed orders, and risk aversion. It is an idea that frightens a number of millennial leaders.

Millennial officers grew up in an Army world where mission command was introduced and widely applied. They found success under it for most of their careers. But also consider that senior officers found success with it as well. A major with maybe 12 years at the start of the Operation Iraqi Freedom in 2003 may now be a full colonel and possibly a brigade commander. In the same time period, the tenets of mission command were infused into these now-senior commanders and leaders for as long as the junior ones. Using mission command with little of the “bureaucratic malaise” in garrison life has provided opportunities, success, and a better way of doing business than what they saw as junior officers. Why would they want to go back to business as usual?

Mission command and its young practitioners can find just as much success in garrison as they did in combat. But senior leadership needs to allow it to happen. Allow it to happen in a way that keeps leading a formation exciting and worthwhile. Allow it to happen by minimizing the bureaucracy and nonsense that checks a block instead of maintains readiness. Allow it to happen because it has proven that it works when needed at war. Army leaders should maintain and hone one solid leadership philosophy and not two, very different forms: one for war and one for peace.

Brad Hardy is an active duty Army major. The opinions expressed in the article are solely those of the author and do not reflect those of the U.S. government, the Department of Defense, or the U.S. Army.