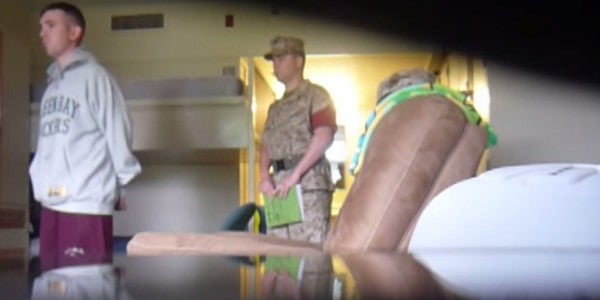 For those who aren’t familiar with field day, it’s a weekly occurrence for enlisted Marines living in the barracks — living in the barracks is generally mandatory for anyone not married. Every week, on the unit-designated field day, Marines clean their rooms, thoroughly wiping down every surface the night before. The next day, they wait outside while some angry looking staff noncommissioned officer runs his hands over cabinets and dressers searching for dust.

A video we stumbled across on YouTube shows one such inspection, or rather, it appears to show a re-inspection, where a staff noncommissioned officer fails a room on field day. It isn’t so much the failure of the room, as it is the God-awful leadership displayed by this gunnery sergeant that led us to want to share it here. We’ll explain.

If you were to ask any officer or staff noncommissioned officer about the necessity of field day, he or she would almost certainly tell you that it’s a vital component of maintaining discipline and ensuring healthy living standards in the barracks. That standard has clearly been met here — there is nothing objectively unhealthy or unsanitary about this room; and they’ve gone through two room inspections in a week, demonstrating a commitment to discipline.

There’s a line between maintaining good order and discipline, and fucking with your subordinates. Somewhere between complaining about wrinkles in the bed and threatening to take the corporals’ couch away, this unidentified gunnery sergeant crosses it.

Shortly after the video starts, you hear the gruff voice of the company gunny complaining about cigarette butts, and you know how this is going to turn out. Anyone who has served in the Marines instinctively knows that the Marine will probably be yelled at for any number of rule violations, real or imagined.

In addition to being an asshole for no real reason, it’s a little hard to make sense of what the gunny is saying — maybe he’s getting ready to pick up first sergeant?

What does that even mean? Somewhere in elementary school English class, we learned never to use the word in its own definition. Are you inspecting the initial inspection? Does that mean you’re there to critique your initial performance during this room inspection, because that might not be such a bad idea.

There are plenty of other gems in here as well, like when he describes his role to the room’s occupant and the terrified-looking duty NCO standing next to him.

“I’m like a jack of all fucking trades. Sergeant major utilizes me the way he sees fit because I know I get the job done” — we can probably assume he meant, he knows I get the job done. “Now I’m gonna be a lot harder on my NCOs. You shitbirds be locked-on on a weekly basis.”

And, then it gets even better … or maybe worse.

This dude uses every stereotypical phrase in the Marine staff noncommissioned officer manual. From the cadence of his voice, to cursing every other word as a crutch, to saying “utilize” for no damn reason, to acting like he’s old and wartorn and blind (“I’m fucking 40 years old and half fucking blind and I can see that ,” he says), this guy is a walking caricature of an enlisted Marine leader.

“It would behoove you, to fucking get this shit squared away,” he says. “Every day, you should be fucking squared away, so come fucking Thursday, or fucking Friday morning, it’s a general clean up — ‘tidy up my rack and I’m fucking good.’”

We can all probably agree that there’s nothing particularly wrong with this Marine’s room, but we know that he’s going to get chewed out for it. Ok, his rack is a little sloppy, and he left some crap out of his wall locker. But it’s really not worth all that anger, especially on a Friday after work. When you think about it, it’s ridiculous. Hell, it’s a little bit crazy.

In the case of this gunny, he’s either that upset over a few wrinkles in a bed, which is nuts, or, he’s just pretending to be angry, knowing full-well that it’s no big deal, but he, like the rest of us, has it drilled into his head that he should act like it’s a major problem — which is certifiable.

As for the young Marines, should they have made their beds better? Sure. But these issues are often a reflection of the sort of leadership in the unit. They respect their gunny so much, they hid a camera to capture his leadership acumen, then posted the results online. But what sort of respect could that gunnery sergeant honestly expect? Respect goes both ways.

Instead of serving the Marines he’s tasked to lead like a good leader would, this guy just berates and threatens them and thumps his own chest.

“Do we not understand the concept behind H&S; company gunnery sergeant?” he asks rhetorically, then proceeds to lay it out in a way we’re sure is not in his actual billet description. “I run the barracks. I run the fucking company when the first sergeant’s off deck, we understand that? I’m the acting XO when the XO goes off deck.”

Imagine how important he felt walking out of that room. He sure showed them. He only needs two senior Marines to go away then he’ll be the acting executive officer and the acting first sergeant. Mom must be so proud.

Regardless of why it is that some staff noncommissioned officers are always angry and on a power trip, one thing is certain: It’s shit like this that makes most enlisted Marines do a happy dance the moment they get their DD-214 and get out of the Corps, because they can finally feel like adults again. Yeah, that’s right — leaving the Marines let’s you feel like a grown-up, because you don’t have some stranger storming into your room on a Friday or Saturday, ripping into you because of some dust on a drawer you never use.

The same Marines who are berated and belittled for minor, sometimes even nonexistent infractions, are later required to be responsible for the success of their mission, their safety, and the safety of their brothers and sisters while downrange. Then, the moment they get back in garrison the flak and kevlar come off and are immediately replaced by diapers and a binky.

Here’s a leadership tip: If you don’t want your Marines to act like children, don’t treat them like children.