What enlisted troops drink at every stage of their careers 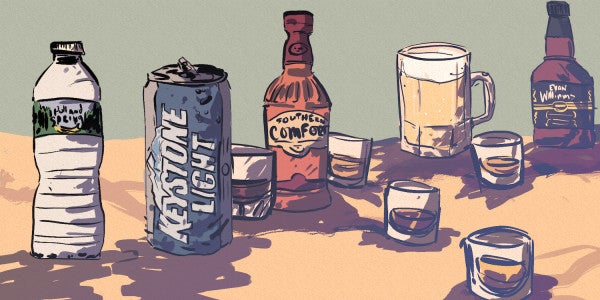 The enlisted barracks always reminded me of what fraternities would be like if they weren’t affiliated with a college. The drinking often starts at the smoke pit as soon as you’re cut loose from work and usually ends with a few stragglers arguing over who gets the last beer, with one guy randomly falling over because he fell asleep standing up.

It’s no real wonder that social drinking continues throughout an enlisted service member’s career. It starts in the barracks, where you live for your first few years, and follows you through your time in the military.

Related: What officers drink at every stage of their careers »

For the sake of simplicity, I’ve used Marine ranks and while the specific drinks may differ slightly based on your service — airmen may substitute appletinis for back-to-back shots — the general idea remains the same. Here are some stereotypical drinks and drinking habits you can expect to come across during each stage of your enlistment.

Water is the beverage of choice for privates, or to say it another way, it’s all they can usually drink. For the most part, privates are either under the legal drinking age, still in boot camp, training, or they’re an E-1 because they had the book thrown at them so hard that they’re forbidden from touching anything with booze in it, even mouthwash. They’re sober, and their breath stinks, but at least they’re hydrated.

Keystone Light all day, everyday. A private first class is a boot, and everybody knows it except him, and if he did, he wouldn’t care. In their own eyes, boots are hard charging warfighters with a cool new haircut, and no real bills, so all of their income is disposable. Naturally they go big and load up on two or three 30 racks of the cheapest beer the PX sells, usually Keystone Light, but occasionally they’ll pick up Coors if they want to class it up.

The majority of PFCs’ social media posts involve beeramids and empty handles, usually plastic, and there’s almost always some piece of military paraphernalia in the photo. They drink the night before a three-mile run, because cheap beer is mostly water anyway, and the only thing they’re more excited about than drinking is the possibility of a deployment.

The first words out of almost every lance corporal’s mouth when someone asks how they like the military, followed by a long and deep swig of Dr. Pepper and Southern Comfort — though this can be substituted with rum or whiskey and Coke. By this point, they might be preparing for, currently on, or recently returned from a tour overseas. It doesn’t matter where.

The disillusionment has set in and he doesn’t care that he’s in a race between tooth decay and liver failure, he just wants to get drunk. Fast. Well, this’ll do it. It’s kind of like drinking boozy cotton candy: It’s disgustingly sweet, and the hangover is even worse.

When it comes to drinking, it’s become a competitive sport and noncommissioned officers are at the Olympic level. Enter the Four Horsemen, which can be served as a cocktail made up of four types of whiskey, though sometimes people go a bit off book. Typically, it’s Jim Beam, Jack Daniels, Johnnie Walker, and Jameson. Alternatively, some corporals, or enterprising lances and PFCs, may just do four back-to-back shots of each, before abruptly yelling that they love everybody within earshot and stumbling away.

On slow days, corporals have been known to swap the Four Horsemen with a shot of hard liquor and a beer chaser.

The short-lived craft beer stage, sergeants tend to be in a no-shit leadership position, but they’re still one of the guys — at least, that’s what they keep telling themselves. Maybe they want to show their troops that they’re laid back NCOs, with a certain panache and class, so they make sure everyone sees them drinking something from a local brewery, usually an IPA, on draft, and preferably in a frosted mug. Meanwhile, they’re doing their very best not to seem overly excited that they’re not drinking alone tonight.

Holding a handle of Evan Williams in a vice-like grip, the staff sergeant has accepted that he’s no longer one of the guys. In fact, he hates the guys. One-third of his platoon is unable to train or work because they’re either in legal limbo pending a recent DUI, headed to court to finalize their divorces, or they’ve come down with the clap. The guys are the reason the first sergeant reads him the riot act every morning. So when he drinks, he goes big. These days he’s got a membership card to the nearest bulk goods store, and he’s taken to buying cases of low-end whiskey. Handles preferred.

On the days where happy hour starts at 0500 instead of 1700, Gunny strolls through the office with his customary coffee mug in hand, acting slightly less crusty than usual. Depending on his palate, he might stick with whiskey, though his breath is sure to give him away. Some have been known to use rum or a coffee liqueur like Kahlua, Baileys, or Carolans.

Just heaven help his subordinates if he ever runs out of coffee.

Unlike everyone else who uses a pocket flask, master sergeants and first sergeants don’t do it ironically. They do it because it’s practical, and they’re all about practicality at this point. Their work life is full of early mornings, late nights, and too many hours stuck behind a desk five feet from a commanding officer they can’t stand. The only escapes from the office are the back-to-back meetings where they’re constantly surrounded by officers who think they know more than them after just four or five years in.

God, he needs a drink, which is why the military issued pants with cargo pockets. Doesn’t matter what’s in the flask, nobody knows and everyone knows better than to ask.

His go-to drink is an innocuous bottle of dark brown liquor, or maybe it’s light brown, or even clear. It varies. Kept in his desk, it’s always within reach and leaves this old war horse cheerful and pleasant, as he loudly proclaims that he only has “X” days left until retirement.

No one knows how long that bottle of desk booze has been there, but it does seem to change, reappearing half-full after he makes an impromptu tour of the enlisted barracks.