Pour one out for the troops. 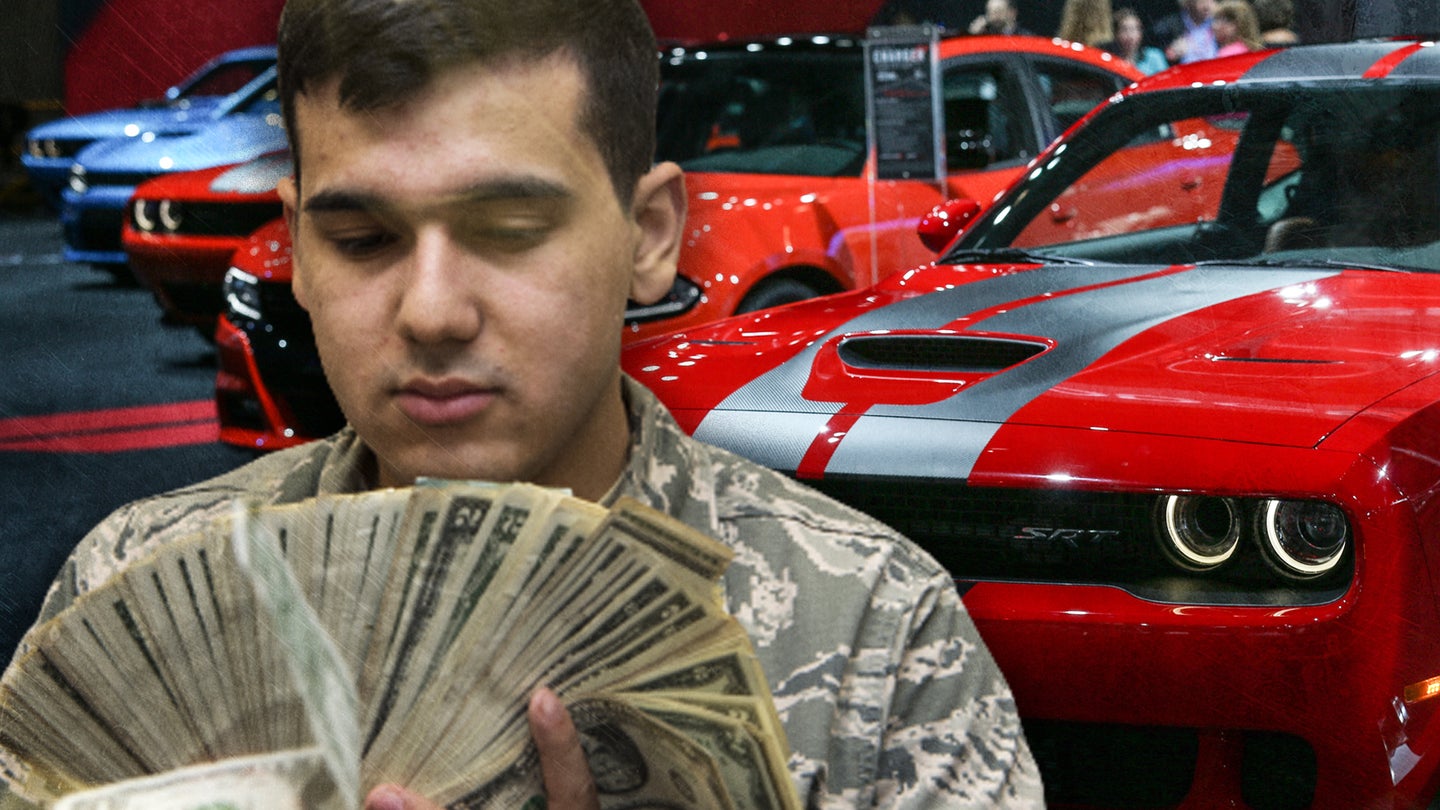 What do to with all that money, now that there will be no muscle cars to go broke over. (Task & Purpose photo composite/Getty/DoD).
SHARE

The U.S. military’s love affair with Dodge Chargers is officially coming to an end. You may take a moment to process the news.

Dodge is discontinuing the sales of its gas-powered Charger and Challenger cars as it turns to electric vehicles, according to CNBC. The names could be resurrected in the future for electric muscle cars, CNBC reported, but it appears the era of junior troops spending their deployment pay or signing bonus away for a brand new Charger is closing.

It may be bad news for troops but it’s personally great news for me, as I have heard the joke an unbelievable amount of times and struggle to find something more played out than jokes about a soldier or Marine buying a Dodge Charger — or Ford Mustang, or Chevrolet Camaro — with an impossibly high-interest rate.

But as much as I hate to admit it, it’s a common stereotype because it’s true. Chalk it up to the fact that they look cool, or that it’s the first time that young a service member is living on their own and making their own money, but the stereotype is so true, in fact, that one person on Reddit said they thought the Army gave soldiers a Charger with their service contract.

“Not sure why it’s a trend but guys who enlisted in [the] Army would always buy a charger when they get their first payments,” another person commented on the Reddit thread. “I lived by an Army base and you always knew when new recruits got their first payment because of the influx of chargers rushing down the street and dealerships packed.”

And while it’s all well and good to do some good-natured jabbing at the stereotype, it’s not just about irresponsible troops, but predatory practices used by lenders who know exactly who they’re dealing with.

“Predatory lenders like to prey on young military members because they’re often inexperienced with money, have little to no credit and are usually very excited to spend that first paycheck,” Tara Falcone, a certified financial planner and Navy spouse told NBC News in 2019.

Car dealerships and lenders just off-post looking to take advantage of inexperienced service members is such a problem that earlier this year, California lawmakers proposed a bill that would mandate a 30-day “cool-off” period when they buy or lease a vehicle. Under the proposal, service members would be able to return any lease or purchased vehicle for enlisted service members.

“This is a very vulnerable group, some of our more junior enlisted service members,” said California Attorney General Rob Bonta according to the Associated Press. “They have a little bit less experience in the world, they’re often younger and they’re often more financially vulnerable. Their wages are less than some of the more senior members of the military.”

Falcone listed out a series of tips for how service members can avoid similar situations that could hurt them financially, according to NBC, including being proactive about getting information about a loan before you seek it out.

“Don’t trust that the lender is going to tell you the right thing,” Falcone said.

She added that troops need to know how much they can afford — in total, not just at the monthly payment of a vehicle — and go into meetings ready to ask questions, and even more ready to “get up and walk away” if things don’t feel right.

“When it comes to your money,” she said, “you are the authority.”

With fewer Chargers and Challengers in the lots of shady off-base dealers, that may stop young troops from blowing all their hard-earned pay in one fell swoop — and might put an end to tired jokes about E-3s and high-interest rates. But probably not.