The 82nd Airborne awarded soldiers for the Kabul evacuation, then took the medals back for now

The soldiers left the quiet awards ceremony with nothing. 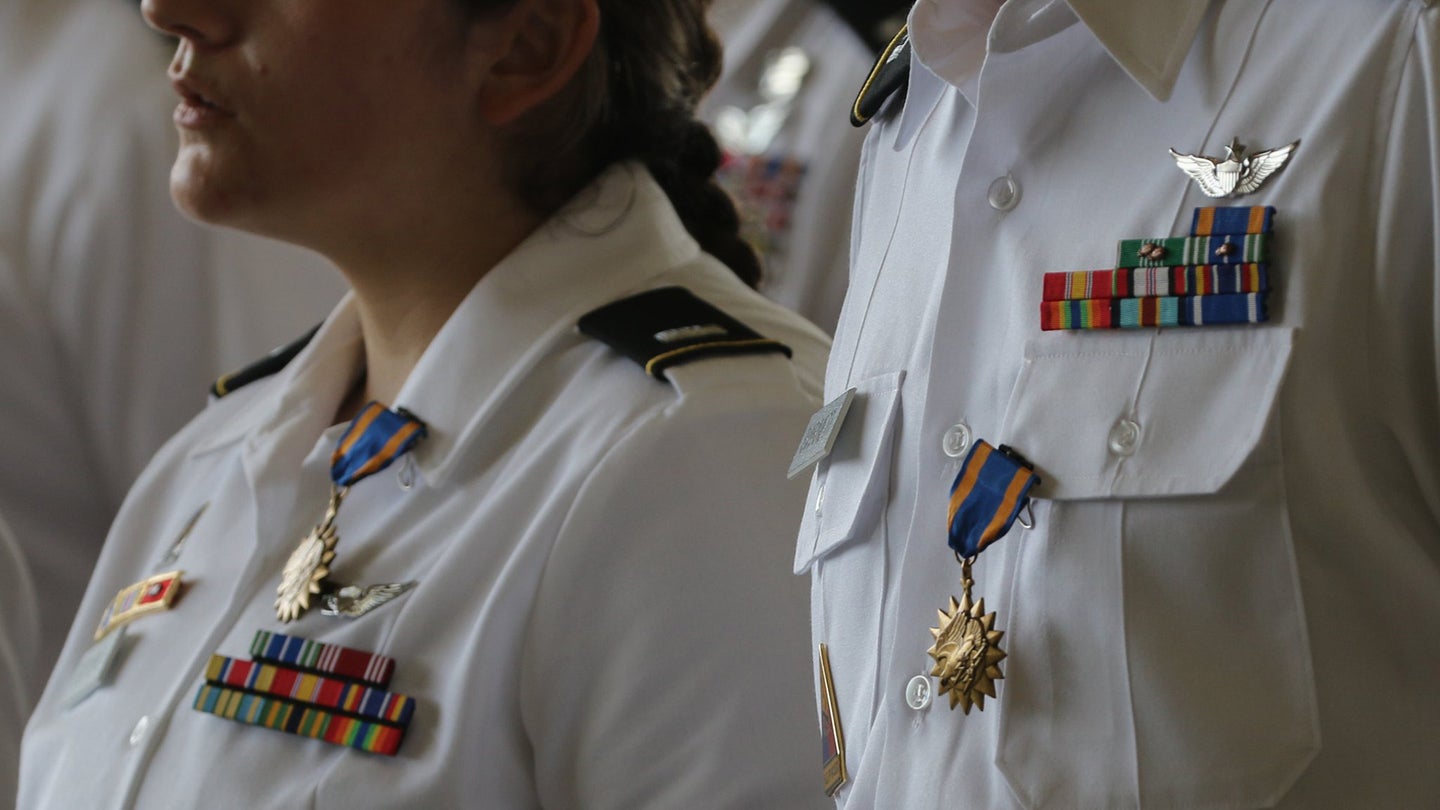 Roughly a dozen soldiers with the Army’s 82nd Airborne Division’s Combat Aviation Brigade on Friday were presented with awards for their heroism during the August 2021 evacuation of Kabul. But because those awards have not yet been formally approved, they were taken back at the end of the ceremony, according to two people with knowledge of the award ceremony at Simmons Army Airfield, Fort Bragg, North Carolina.

None of the recipients received award citations or other documents that explained why they had been recognized for their roles in helping to rescue more than 124,000 people from Afghanistan after the Taliban captured the country’s capital on Aug. 15, 2021, both people told Task & Purpose.

In total, more than 50 soldiers who served with the combat aviation brigade last August are expected to receive Air Medals with either “C” Devices for combat or “V” Devices for valor, Task & Purpose has learned.

A post on the 82nd Airborne Division Combat Aviation Brigade’s Facebook page shows soldiers receiving Air Medals at Friday’s ceremony, but the post does not mention anything about the evacuation from Hamid Karzai International Airport last year.

In response to questions from Task & Purpose, 82nd Airborne Division spokesman Lt. Col. Brett Lea confirmed that 13 paratroopers had been awarded Air Medals with a “C” device and another two soldiers had received Air Medals with a “V” device at a ceremony on Friday. These medals were awarded to soldiers who conducted aerial flights under combat conditions during Operations Freedom’s Sentinel and Allies Refuge.

“The awards were approved by XVIII Airborne Corps and confirmed last week; however, the signed awards (DA Form 638) were not complete,” Lea said. “They will be ready this Friday [and] provided to the awardees at that time. In standard practice for awards ceremonies, the awards were pinned for the ceremony and then returned to the unit S1 [administration] section for use in future ceremonies.”

No paratroopers received the Bronze Star Medal for their actions at Hamid Karzai International Airport, Lea said. Other soldiers with the combat aviation brigade who could not attend Friday’s ceremony due to scheduling conflicts will receive their awards later.

The battalion itself also received the Brigadier General Carl I. Hutton Memorial Award Exceptional Aviation Unit of the Year Award.

“Complicating their mission and operations, the Task Force conducted split air support operations with multiple command nodes providing over-the-horizon support from Kuwait and moving from Bagram and other locations to the international airport,” the citation continues. “The men and women of Task Force Talon met every unique challenge and successfully and safely consolidated and returned home every deployed paratrooper. The extraordinary professionalism and commitment to safe and effective operations by the men and women of the task force talon reflect great credit upon themselves, the 82nd Combat Aviation Brigade, the 82nd Airborne Division, and the United States Army.”

The evacuation from Hamid Karzai International Airport was one of the biggest rescue operations in U.S. military history. Yet, the fact that Friday’s ceremony received almost no publicity is part of a wider pattern of how the military branches have largely avoided issuing announcements for those few troops that have been recognized for their bravery in Kabul.

The Air Force has been the most forthcoming service so far. It has publicly announced awards for several airmen who worked on the ground and in the air to get people to safety. One of them is Capt. Matthew McChesney, who received the Distinguished Flying Cross with “V” for valor.

McChesney was the aircraft commander for a C-17 that was advised “land at your own risk” before touching down in Kabul, not knowing if the Taliban would fire on them. Yet the C-17’s seven crew members were still able to unload the cargo that U.S. special operators needed for evacuation efforts.

Even with the Air Force, the awards process has not gone perfectly: Staff Sgt. Dennis Gonzales-Furman was the only member of another C-17 aircrew that did not receive the Distinguished Flying Cross for a mission that rescued 153 people. Gonzales-Furman was the flying crew chief during the mission, and the aircraft commander Lt. Col. Dominic Calderon told the Vacaville Reporter, “If I had a game ball that night, I would have given it to him.”

For the most part, the other military branches have been silent about service members being honored for their role on the ground during the evacuation. These days the best way to find out which troops have received awards is to check social media rather than official military websites.

Wilson, who was standing just 10 meters from where the suicide bomber struck, was blown into the air and his body was showered with shrapnel, according to his award citation, which was posted on Instagram.

“Upon seeing a critically injured casualty next to him, he disregarded his own grievous wounds, the tear gas engulfing him, and reports of gunfire and began dragging this Marine to safety,” the award citation says. “Unable to continue forward due to a significant loss of blood, he passed the casualty to an uninjured Marine, and refused medical treatment for his own life-threatening wounds.”

The 82nd Combat Aviation Brigade’s awards ceremony took place little more than a week before the first anniversary of Kabul’s fall to the Taliban last year. It is not known how long it will take for the military branches to recognize all the service members whose bravery last August helped to pull off a hard-fought victory at the end of a lost war.