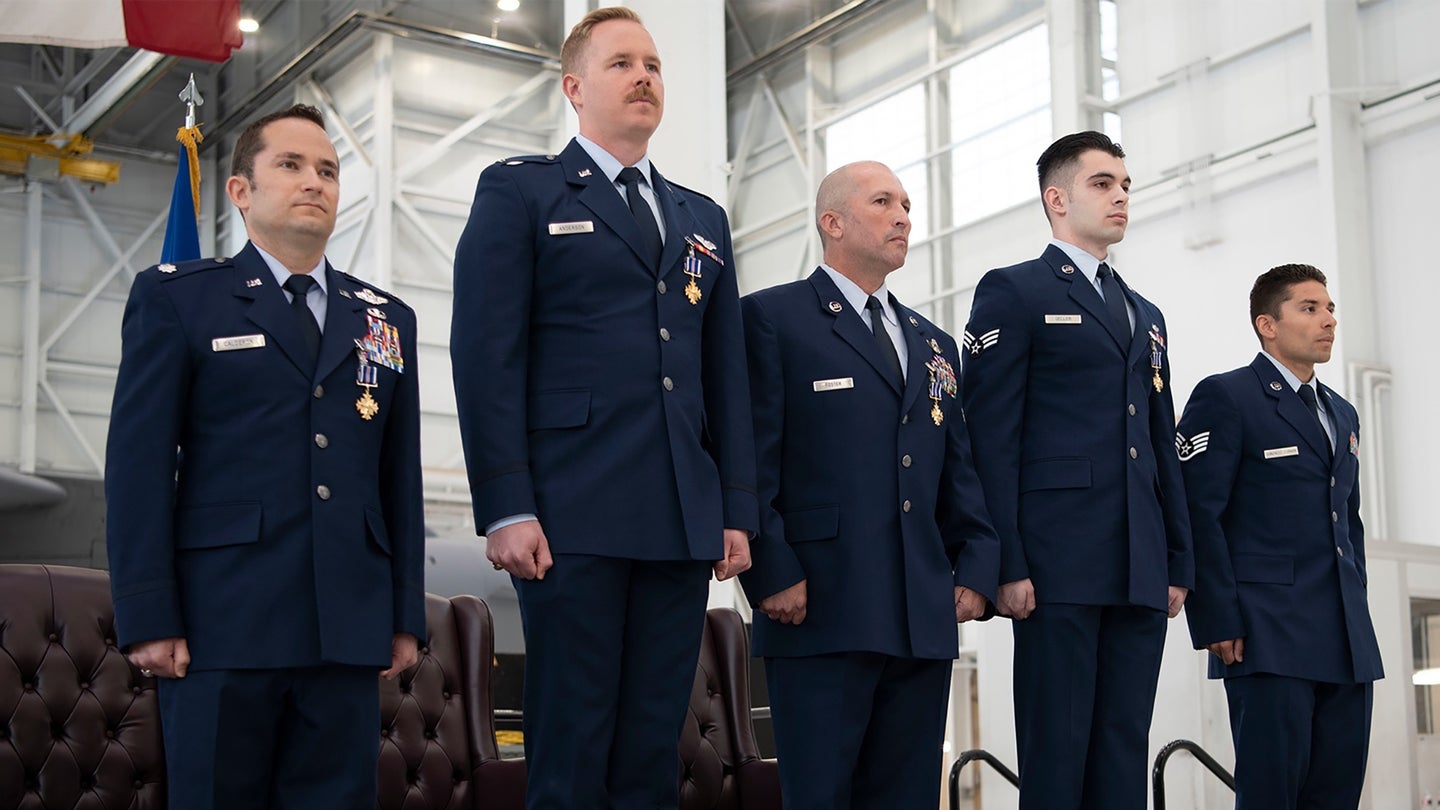 Four members from a C-17A Globemaster III aircrew were awarded the Distinguished Flying Cross for their performance during the chaotic and violent evacuation of Kabul last August.

During a ceremony at Travis Air Force Base in California on Friday, the medals were presented to Lt. Col. Dominic Calderon, 1st Lt. Kyle Anderson and Master Sgt. Silva Foster, from the 301st Airlift Squadron, and Senior Airman Michael Geller of the 517th Airlift Squadron. The ceremony also recognized Staff Sgt. Dennis Gonzales-Furman, of the 437th Aircraft Maintenance Squadron at Joint Base Charleston, S.C, who was the aircrew’s flying crew chief during their mission in Afghanistan.

The crew was initially tasked with flying in members of the 82nd Airborne Division, who were helping secure Hamid Karzai International Airport during the U.S. withdrawal from the country. On Aug. 15, as the Taliban seized control of Afghanistan’s capital and thousands of civilians started making their way to the airport in search of escape, the crew’s mission quickly changed to one of evacuation.

“The conditions that day were like none I had ever seen,” said Calderon a short time after his return from Afghanistan, according to an Air Force press release. “The airfield was breached and there were mass crowds entering the airfield. Still, the crew performed well under enormous pressure. I couldn’t be more proud of the way the entire crew operated.”

Despite the heightened risk at the airport and the minimal manning of the aircrew, they ultimately rescued 153 U.S. citizens, allied partners and Afghans.

For Calderon, Anderson and Foster, who are members of the Air Force Reserve, the Distinguished Flying Cross, which is awarded to service members who distinguish themselves in combat through heroism or extraordinary achievement in aviation, was especially significant.

“Within the Reserves, we only have 45 people right now who have received this award,” said Maj. Gen. Matthew J. Burger, the deputy commander of Air Force Reserve Command and former commander of the 349th Air Mobility Wing. “Only five of those were mobility airmen. The last time a mobility airman was awarded this award was in 2004. This is a unique and special, and an extraordinary achievement while conducting flight operations.”

“This award for my military career is the biggest honor I ever experienced,” added Foster. “You train for this throughout your entire career and you actually hope this moment never comes up.”