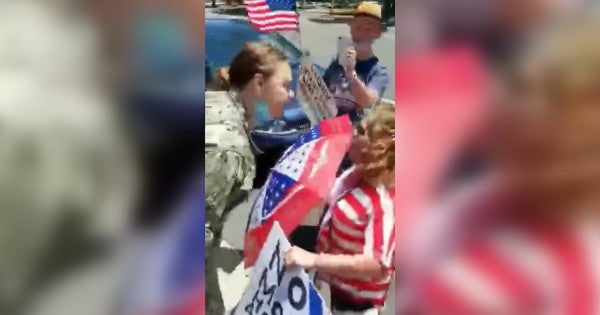 A Navy petty officer is under investigation by her command after a viral video showed her screaming “fuck Trump” at a group of protestors in California while wearing her military uniform.

The sailor appears in the video yelling at a group of people gathered in front of the Ventura Country Government Center on Sunday to protest California's state-wide mask mandate amid the novel coronavirus (COVID-19) pandemic.

“Fuck Trump,” the sailor can be heard yelling at the crowd, flipping both middle fingers at the assembled protestors. “Fuck you.”

The crowd's responses are anything but receptive.

“Take the flag off your shoulder,” one protestor can be heard yelling. “Learn how to act in a fucking uniform, you fucking piece of shit,” another responded.

In a statement to Navy Times, the service identified the sailor as Aviation Boatswain’s Mate (Launch/Recovery) 2nd Class Sarah J. Dudrey, who is assigned to Naval Base Ventura County some 15 miles away from where the incident took place.

“The Navy is a proponent of free speech and active-duty members are free to participate in protests during their off-duty time,” Larson told Navy Times. “However, Navy members are not authorized to wear military uniforms while engaging in protests and voicing personal opinions.”

Larson isn't wrong. In a February memo to U.S. service members and Defense Department employees, Secretary of Defense Mark Esper reminded personnel to abide by the U.S. military's apolitical tradition and avoid engaging in political activity while in uniform.

“Maintaining the hard-earned trust and confidence of the American people requires us to avoid any action that could imply endorsement of a political party, political candidate or campaign by any element of the Department,” Esper wrote at the time..

“Leaders will review the rules governing participation by DoD personnel in political activities and direct widest dissemination of the guidance in this memorandum to their teams.”