President Donald Trump issued an executive order on Tuesday that he said would ban the military, government contractors and federal grantees from some diversity training 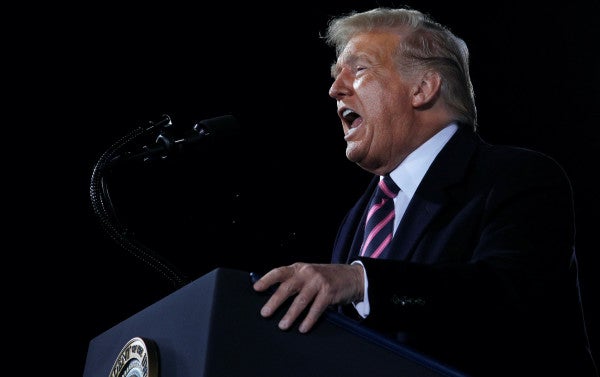 WASHINGTON (Reuters) – President Donald Trump issued an executive order on Tuesday that he said would ban the military, government contractors and federal grantees from some diversity training.

The lengthy order says it forbids “divisive concepts,” including teaching that the United States is “fundamentally racist or sexist” or that any individual bears “responsibility for actions committed in the past by other members of the same race or sex.”

It says military members will not face any penalty for refusing to support or believe these concepts.

“Americans should be taught to take PRIDE in our Great Country, and if you don't, there's nothing in it for you!” Trump said on Twitter as the order was issued.

Related: This slide from an Air Force brief shows airmen what white privilege looks like

Psyche Williams-Forson, who chairs the American Studies department at the University of Maryland, said the order was clearly aimed at pleasing a segment of Trump's base, just weeks before the presidential election.

“It's a dog whistle. It's a way to ease the minds of people who do not want to confront the horror of their ancestry,” said Williams-Forson, adding the order would likely result in a sharp reduction in diversity training across the federal government.

The order comes amid a broad re-examination of racism in the United States in recent months, after police killings of Black Americans including George Floyd, who died on May 25 in Minneapolis.

Many U.S. companies have issued statements of solidarity with the Black community, promised to increase diversity among employees, and collectively pledged nearly $2 billion to advance racial justice and equity.

But Trump and conservative lawmakers have chafed at what they see as a major rewriting of American history and efforts by protesters to tear down U.S. monuments.

Republican Senator Tom Cotton sparked a furor in July when he attacked the New York Times 1619 Project's effort to make slavery a focal point of American history, calling slavery a “necessary evil upon which the union was built.”

The order followed Trump's creation of the 1776 Commission to promote what he calls “patriotic education.” He has hammered the theme during political rallies in recent weeks, often drawing cheers from mostly white audiences.

“By viewing every issue through the lens of race, they want to impose a new segregation, and we must not allow that to happen,” Trump said at an event in Washington last week. “The crusade against American history is toxic propaganda.”

On Sept. 4, the White House Office of Management and Budget issued a memo that preceded Tuesday's order, saying that federal agencies could no longer use taxpayer dollars to fund “un-American propaganda sessions” that provided instruction about critical race theory, white privilege or that “taught that the United States is an inherently racist or evil” country.