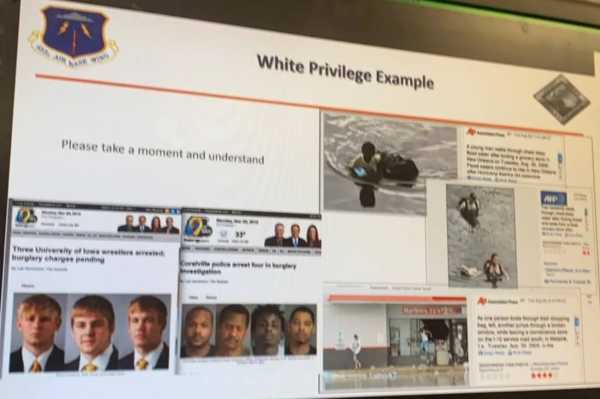 At least one Air Force base has distributed training materials designed to foster a conversation around the concept of white privilege amid the service's reckoning with racial disparities in the ranks.

Personnel at Joint Base Langley-Eustis in Virginia were recently treated to a training brief which included a slide that instructed airmen to “take a moment and understand” several examples of white privilege, which broadly refers to the social, economic, and political circumstances that frequently benefit white Americans over other citizens of different races and ethnicities.

One slide in the training material noted how the news media often portrays white people much more sympathetically than people of color, especially in stories that deal with crime.

Air Force officials confirmed the authenticity of the slide, which was first made public on the unofficial Air Force amn/nco/snco Facebook page.

“The need to have candid, respectful dialogue with colleagues about racial bias has never been more crucial,” a spokesman for the 633rd Air Base Wing told Task & Purpose. “The slide was created by a unit at Joint Base Langley-Eustis as a conversation starter in a larger discussion on race in America.”

The slide contains examples of news coverage from a local news outlet that contrasts two stories about white and Black people accused of committing crimes. Despite their arrests for the same offense (burglary), the white suspects are portrayed in jackets and ties, while the Black suspects are shown in police mugshots.

“The discussion was meant to acknowledge various terms that are being used, to understand them, and then have an open dialogue on the topic,”  the spokesman said. “These are tough and often emotional conversations that are needed to foster a culture of inclusion and understanding for Airmen who must lead a diverse Air Force.”

It remains unclear when the training materials were created, and the official declined to provide the full presentation. Task & Purpose filed a public records request for the document on Friday.

The Air Force has faced an internal reckoning on racism in the ranks in recent months following a scathing June report from advocacy group Protect Our Defenders that detailed how the service had tried to suppress evidence of systemic racism for years.

The report prompted the Air Force Inspector General’s Office to look into disparities in how Black airmen are disciplined and promoted within the service.

“We want to make sure our Air and Space Professionals are able to share their experiences and concerns, and we want to empower them to be a part of the solution,” Lt. Gen. Sami Said, the Air Force’s inspector general, said in a statement at the time. “Their voices will be heard and captured for the record. We have a tremendous opportunity here, and we will not waste it.”

These revelations on how the Air Force failed to handle systemic racism in the ranks coincided with nationwide protests over the death of George Floyd, an unarmed Black man who died at the hands of Minneapolis police officers in late May.

“[W]hat happens on America’s streets is also resident in our Air Force,” then-Air Force Chief of Staff David Goldfein wrote in a message to the force in early June. “Sometimes it’s explicit, sometimes it’s subtle, but we are not immune to the spectrum of racial prejudice, systemic discrimination, and unconscious bias. We see this in the apparent inequity in our application of military justice.”

In early July, the service introduced a new survey asking airmen to describe racial injustice or bias they'd witnessed or experienced during their careers — according to Goldfein, the response from airmen was “overwhelming.”

“Literally thousands and thousands of airmen have responded to this survey and participated,” Goldfein told Military.com at the time. “”There's a lot of frustration — a lot of it's been pent up over many years. And we're not going to wait until the end [of the study] before we put out what we're hearing.”