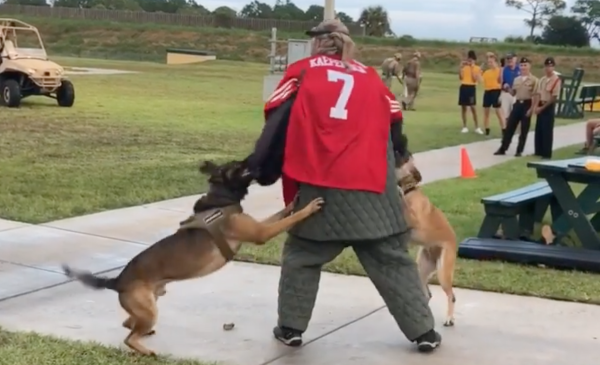 Naval Special Warfare Command is suspending its support to the National Navy SEAL Museum amid an ongoing investigation into a video that showed military working dogs attacking a man wearing a Colin Kaepernick jersey, a Navy official confirmed to Task & Purpose.

“We will revisit our relationship with the Museum when I am convinced that they have made the necessary changes to ensure this type of behavior does not happen again,” Rear Adm. Collin Green, head of Naval Special Warfare Command, wrote in a Monday email to the force.

James LaPorta of the Associated Press first reported on Tuesday about Green’s decision to halt support to the museum in Florida.

The video of the dogs attacking a target wearing a Kaepernick jersey was part of a demonstration at the museum that was initially posted on Instagram in January 2019, but on Sunday it began recirculating on Twitter.

Kaepernick started a national movement in 2016 when he decided to kneel during the national anthem before football games in a silent protest of police brutality.

The caption for the video taken at the SEAL museum reads: “Colin Kaepernick stand in Josh gets attacked by 5 Navy SEAL dogs for not standing during the National Anthem at a Navy SEAL Museum fundraiser.”

In his email, Green said the video’s underlying message is “unacceptable.”

“While we have no indications that any NSW personnel, equipment, or animals took part in the demonstration that day this incident reflects upon us,” Green wrote in his email, which was obtained by Task & Purpose. “While the museum is an independent non-profit organization and the participants were contracted employees from outside the DoD, in many ways, these facts are irrelevant. We have been inextricably linked to this organization that represents our history.”

The Defense Department and individual military branches have launched new efforts to combat bias within the ranks since the death of George Floyd, an unarmed Black man, at the hands of Minneapolis police officers in May and the ensuing protests against police brutality and racial injustice

Defense Secretary Mark Esper announced in July that the military was eliminating official photographs from the military promotions process and he had ordered the services to review their grooming and hairstyle regulations for racial bias.

“Each and every one of us serves to protect our fellow Americans – ALL Americans,” Green wrote in his email. “Even the perception that our commitment to serve the men and women of this nation is applied unevenly is destructive. We may not have contributed to the misperception in this case, but we suffer from it and will not allow it to continue.”

Related: This could happen to me’ — The Air Force’s top enlisted airman shares his struggle against racism in the ranks