"You don’t know the anxiety, the despair, the heartache, the fear, the rage that comes with living in this country, OUR country." 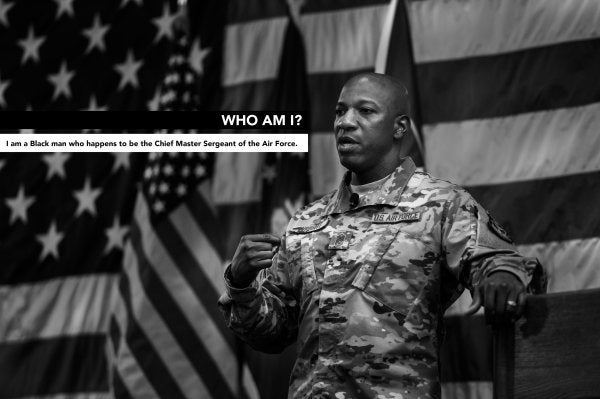 The Air Force’s top enlisted man, Chief Master Sgt. Kaleth Wright, let his guard down on Facebook on Monday by posting about what it’s like to be a black man in the Air Force, what he thinks can be done to remove racism from his branch, and how Americans in general can work to better understand one another.

The chief’s Facebook post came days after the Air Force was blasted for covering up its own reports of racial disparities in its justice system. Then, over the weekend, protests erupted nationwide over the killing of an unarmed black man in Minneapolis named George Floyd, who died after a police officer knelt on his neck for nearly nine minutes.

Wright said he felt the death of George Floyd the way he’s felt the deaths of previous black men who were killed by police officers: personally.

“Who am I? I am a Black man who happens to be the Chief Master Sergeant of the Air Force,” Wright wrote. “I am George Floyd…I am Philando Castile, I am Michael Brown, I am Alton Sterling, I am Tamir Rice … What happens all too often in this country to Black men who are subjected to police brutality that ends in death…could happen to me.”

Racism doesn’t care about rank, Wright wrote, since any black airman can still get killed by police.

“[B]elieve me my heart starts racing like most other Black men in America when I see those blue lights behind me,” he wrote.

That experience of racism extends into the Air Force, said Wright, who directly confronted last week’s scathing report on racial disparities. Written by the advocacy group Protect our Defenders, the report cited Air Force conclusions that Black or African American airmen at the E-2 level receive discipline at double the rate of other demographics.

“I believe that we have not made much progress in this area of racial injustice and diversity among our ranks,” Wright wrote. “This is why I’m working with General Goldfein, first and foremost to have a full and thorough independent review of our military justice system. We will look to uncover where the problem lies, and how we can fix it.”

Wright's pledge was a sharp contrast to last week's report, which accused the Air Force of failing to fulfill its own promise to investigate its racial disparities. However, the justice system isn’t the only thing Wright hopes to fix in terms of making the Air Force a more tolerant place for black airmen. Specifically, Wright encouraged airmen to “take the time to talk to someone,” and to black airmen in particular.

“You might think you know what it’s like to grow up, exist, survive and even thrive in this country as a Black person,” he wrote. “But let me tell you, regardless of how many Black friends you have, or how Black your neighborhood was, or if your spouse or in-laws are Black…you don’t know. You don’t know the anxiety, the despair, the heartache, the fear, the rage and the disappointment that comes with living in this country, OUR country every single day.

Related: Sharing Stories Of War And Racism In The VA Waiting Room

“Don’t misunderstand me, they don’t need, nor do they want any special treatment,” Wright added. “But they deserve to be treated fairly and equally, both by our United States Air Force and these United States of America…this begins with you, and I am asking, no fighting, for your understanding.”

The goal, Wright said, is to create “a better future for this nation. A future where Black men must no longer suffer needlessly at the hands of White police officers, and where Black Airmen have the same chance to succeed as their White counterparts.”

How much time Wright has left to implement his recommendations is uncertain, as the retirement date for the outgoing chief is yet to be announced, wrote Air Force Magazine. However, Wright is due to become CEO of the charity Air Force Aid Society on Oct. 1, so it probably won't be much later than that.

“This is by far the best message I’ve ever seen from a Senior leader in regards to race and race relations,” wrote one commenter, whose response generated 76 Facebook reactions, mostly hearts and thumbs-ups. “Thank you Chief for articulating what many of us are feeling and have felt for quite sometime!! This was much needed!!”

Related: The number of National Guardsmen mobilized to address civil unrest tripled in a single day

“It was truly an honor to serve under such a honorable man,” wrote another. “Thank You for having the conversation that needs to happen across military.”

One commenter was already well-prepared to start acting on Wright’s advice.

“It starts with empowering our Airmen with knowledge,” the commenter said. “I had a few female trainees with natural hair, that had to carry around a copy of the regs, because some [military training instructors] would stop them to berate them about their hair. They always waited until they finished, before directing that MTI to me for an education in black hair and the regs. We need to teach, and advocate for our Airmen.”