I’m thinking … about my own experiences, that didn’t always sing of liberty and equality. I’m thinking about living in two worlds, each with their own perspective and views.” 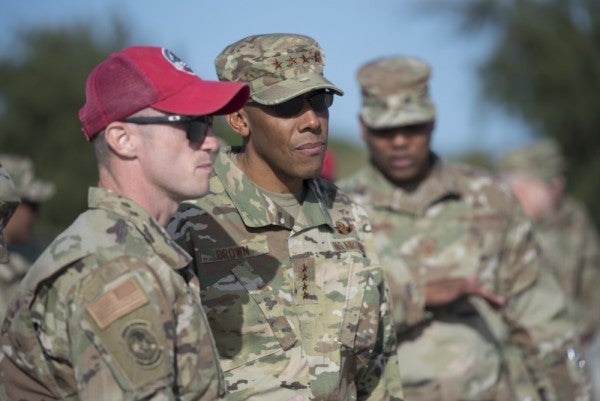 Gen. Charles Q. Brown Jr., the nominee to become the next Air Force service chief and first black service chief in American history, spoke candidly in a new Twitter video published on Friday about the killing of George Floyd by Minneapolis police, the experience of growing up black in America and the Air Force, and how he might handle the issue of racism as head of the branch.

“I’m thinking … about my own experiences, that didn’t always sing of liberty and equality,” Brown said. “I’m thinking about living in two worlds, each with their own perspective and views.”

And finally, on Thursday a letter was leaked from the Air Force Judge Advocate General Lt. Gen. Jeffrey Rockwell asking the JAG Corps for their ideas “on how we tackle this issue of disparity in impact across the entire spectrum of discipline.”

“Are we giving everyone an opportunity to meet—and exceed—standards?” asked Rockwell in the letter, which first appeared on the popular Facebook page Air Force Amn/nco/snco. “We must broaden this discussion beyond Airmen facing disciplinary action. How can we use military justice statistics to contribute to a wider conversation about valuing our Airmen?”

With all that in mind, Brown’s video on Friday seemed to be the latest in a series of soul-searching questions Air Force leaders are asking themselves about race in the service. The commander of Pacific Air Forces shared how he struggled to balance the two parts of his identity throughout his life.

“I’m thinking about wearing the same flight suit with the same wings on my chest as my peers and being questioned by another military member ‘are you a pilot?’” Brown said. “I’m thinking about being a captain at the O-club with my squadron and being told by other African-Americans that I wasn’t black enough since I was spending more time with my squadron than with them.”

Brown discussed feeling how his comments were perceived to represent the entire African-American community, and how he often felt like he had to perform error-free because he perceived his supervisors expected less of him as an African-American.

“I’m thinking about having to represent by working twice as hard to prove their expectations and perceptions of African-Americans were invalid,” he said. “I’m thinking about the airmen who have lived through similar experiences and feelings as mine, or who were either consciously or unconsciously unfairly treated.”

Brown thought of his own two sons, and how he and his wife will have to prepare them to live in two worlds as he does. And thinking about the future led to Brown thinking about his own nomination to become the country’s first black CSAF this summer. As such, it will fall on him to decide whether to keep asking these questions in the future.

Brown said there are some things he won’t be able to repair as chief: “I can’t fix centuries of racism in our country, nor can I fix decades of discrimination that may have impacted members of our Air Force.”

However, there are other things he may be able to improve.

“I’m thinking about how I can make improvements, personally, professionally and institutionally, so that all airmen, both today and tomorrow, appreciate the value of diversity and can serve in an environment where they can reach their full potential,” the general said. “I don’t have all the answers about how to create such an environment in PACAF or across our Air Force. I’m thinking that without clearcut answers, I just want the wisdom and knowledge to lead during difficult times like these.”

“I want the wisdom and knowledge … to make our Air Force better,” he added.

Brown doesn’t intend to be the last airman to share his story about race. The general invited others to send him their thoughts as well.