"[We could have] gone off in a corner with our head bowed. That's not the American way" 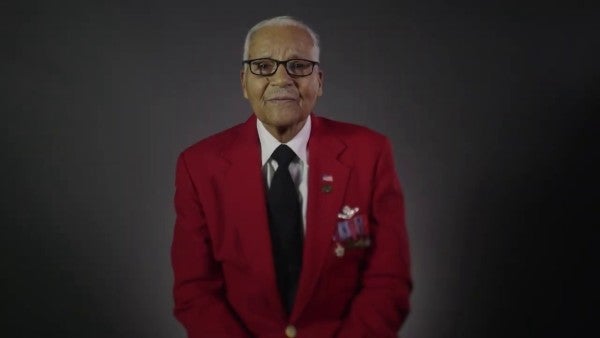 A new video produced by the Air Force will have you standing to salute Brig. Gen. Charles McGee, a 100-year-old retired fighter pilot, who, along with his fellow Tuskegee Airmen, helped liberate Europe in World War II and bolster the cause of civil rights at home.

President Donald Trump honored McGee in his State of the Union address on Tuesday night.

“The Pittsburgh Courier came out and said this was a double victory activity for black Americans,” said McGee of the role the Tuskegee Airmen played in turning the tide of World War II. “Fighting against Hitler in Europe and also fighting against racism here at home.”

The video, which was uploaded to YouTube on Tuesday, was made in honor of McGee's honorary promotion from colonel to brigadier general in December.

The promotion is the latest in a long line of decorations for McGee, who was born in Cleveland Ohio, 1919 and who fought not only in World War II, but also in the Korean War and the Vietnam War.

Along the way, McGee flew 409 combat missions and received the Distinguished Flying Cross, the Legion of Merit, the Bronze Star and the Air Medal.

But it was in World War II that McGee helped open the door for generations of African-American aviators to serve their country.

“Tuskegee Airmen are black pilots, mechanics and support people who, when our country declared war against Hitler, came forward and dispelled the biases and generalizations that, because of the color of our skin, we couldn't support our country in a technical area,” McGee said in the video.

Indeed the National Park Service confirmed in a handout about the Tuskegee Airmen that key leaders in the U.S. Army Air Forces “did not believe that African-Americans had the intellectual capacity to become successful military pilots.”

But after succumbing to pressure from civil rights groups and African-American leaders, the Army decided to train a small number of African American pilot cadets under special conditions. That small number included McGee.

“Our task was to keep the air clear of German fighters that were destroying many of our bombers,” McGee said in the video. “We thought we had enough guns on the B-17s and B-24s to protect them. That wasn't so and that's why the escort began. We also destroyed a lot of Germany's war-making potential on the ground.”

To stand out, the Tuskegee pilots painted the tails of their aircraft red, earning the nickname “Red Tails.”

The so-called trainees were assigned to an old, dilapidated Officers Club that was sorely in need of repairs, according to NPS, and 60 Tuskegee officers were later arrested when they tried to enter the newly-built, fully-functional officer's club enjoyed by white aviators.

When the Tuskegee men refused to sign orders to comply with stricter segregation protocols on base, they were placed under armed guard, according to the NPS. Even German prisoners at Freeman Field were allowed free movement throughout the base.

After word spread of the arrests, many of the Tuskegee officers were released and Col. Selway was relieved of his command. The “Freeman Field Mutiny,” as the incident came to be known, “set the pace for the non-violent protests and sit-ins of the 1950s and 1960s civil rights movement,” NPS wrote.

Overall, the Tuskegee airmen's performance in WWII “helped pave the way for desegregation of the military, beginning with President Harry S. Truman's Executive Order 9981 in 1948,” NPS added. “Consequently, the story of the Tuskegee Airmen constitutes a powerful and seminal metaphor for the struggle of black freedom in America.”

McGee is no stranger to that metaphor.

“One thing personally folks say – 'well how'd you face that,'” McGee said in the video, about the extra fight of having to combat racism. “And I say, well I grew up learning that you treat others like you want to be treated. So important … and then realizing that the value lessons that sustained us are just as important for the young people today, and what they face for America's future and preserving the freedoms we claim we all so much enjoy.

“Don't let the circumstances be an excuse for not achieving,” McGee added. “'They don't like me, they don't want me' … [We could have] gone off in a corner with our head bowed. That's not the American way.”